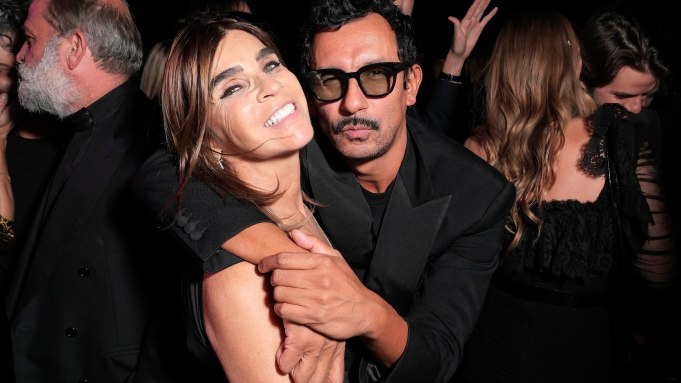 PARIS — The mood was riotous at the CR Fashion Book x Luisa Via Roma party, held at the Monnaie de Paris on the eve of the final day of Paris Fashion Week. Guests let loose to celebrate issue 13 of Carine Roitfeld’s magazine, diving straight for the huge blue-lit dance floor where Heron Preston was spinning tunes.

Model Grace Hartzel and her boyfriend Marlon Magnée floated up the red-carpeted stairs while Magnée filmed with a hand-held camera. “We’re filming a secret project tonight,” whispered Hartzel. Magnée, the frontman of French band La Femme, explained that it was the video for the band’s latest 20-minute long track, which was the soundtrack to Hedi Slimane’s first Celine show on Sept. 28.

Natalia Vodianova turned up with partner Antoine Arnault, swishing her floaty silk polka-dot dress as she posed for pictures. “I’ve done so many crazy things for photo shoots,” said the model. “I tamed piglets, rode horses, posed with geese, swans, wild boar, deer — you name it. Apparently I have a special touch with babies and animals.”

Designers came to pay their respects to Roitfeld, who embraced them all warmly. Olivier Theyskens was looking for some water, but came back with a glass of Champagne. “This is all I could find,” he shrugged.

The designer is the president of the jury of the graduate show of the Haute Ecole d’art et de design (HEAD) in November. He succeeds Serge Ruffieux of Carven, who studied fashion at the Geneva-based institution. The fashion division is now run by designer Léa Peckre. “Her understanding of the younger generation of designers makes it one of the best schools out there,” said Ruffieux.

Glenn Martens of Y-Project chatted to Karolina Kurkova about the post-show relief. “When you work on a collection for 10 days nonstop, once it’s done you feel like you’re floating,” he said. Close friends and family from his native Belgium are coming over to toast the end of fashion season — chances are you’ll find them in his favorite hangout, L’Autobus in the Oberkampf district.

The dance floor was packed. Haider Ackermann busted some moves while Caroline Vreeland tried to get the perfect selfie. Roitfeld proudly hung on her son Vladimir Restoin Roitfeld’s arm. Models moved in towering packs: Lineisy Monteiro, Marjan Jonkman, Lindsey Wixson, Alessandra Ambrosio and Anna Cleveland tried to make their way from the DJ booth to the Champagne bar. Suddenly the crowd went crazy: Mick Jagger had just been spotted on the dance floor.