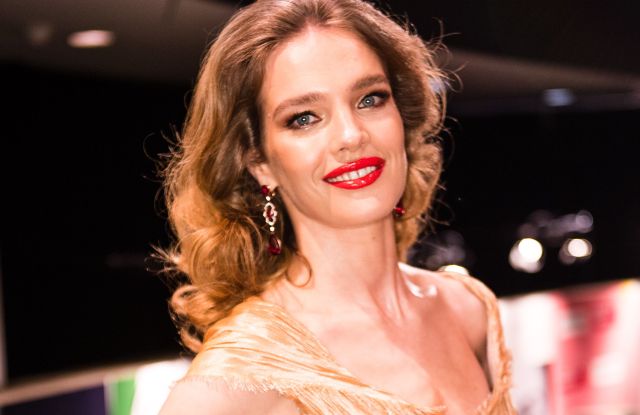 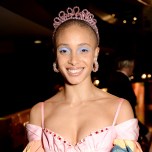 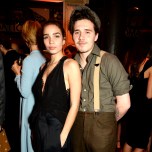 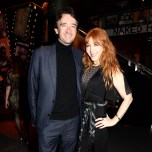 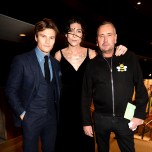 LA DOLCE VITA: When Natalia Vodianova choose a theme for a party, she really goes all out in bringing it to life. For this year’s edition of her annual London’s Fabulous Fund Fair charity gala, the supermodel partnered with LuisaViaRoma to transform Camden’s iconic Roundhouse into a vision of Federico Fellini’s trademark Italian hedonism.

The dress code instructed, “Out of a Fellini Movie” and the invitation was designed to look like an old film flier, with an archive image of Vodianova demonstrating the theme in a form-fitting pink satin dress.

Guests were greeted on the red carpet by a backdrop of Rome’s Trevi Fountain before entering the main event, where a huge fountain dominated the center of the space, complete with water splashes and guards posted to keep the revelers off. It was topped by a spinning disco ball and encircled with luxury fairground stands, given a Dolce Vita twist, manned by teams VIP overseers, where guests could spend carnival tokens with a monetary value at the stands to win some exclusive prizes from a slew of LVMH brands.

But winning required a degree of skill. Rather a lot in the case of the Louis Vuitton FC stand, where one guest had to kick a soccer ball into the goals to win a prize. The catch? Arsenal midfielder Granit Xhaka had been recruited to field the balls. “What we need is to recruit a straight boy with a neat haircut and good aim,” one guest observed, eying up the state of affairs.

Adwoa Aboah was straight in there. Losing the pink satin Manolos and hiking the dress to have a shot. Joséphine de la Baume and Pixie Geldoff followed suit.

Elsewhere, Arizona Muse was manning the Dior Bowling stand, where the challenge was to topple the pins with a huge round of parmesan cheese; Sam Rollinson attended the proceedings at the Celine Alley, where prizes were awarded, according to the number of tomato tins knocked down with a thrown ball; and model and founder of Ohh Couture Leonie Hanne supervised the Givenchy Hoopla Garden, where guests could win by landing hoops over the top of set of classical Italian statues inspired by Florence’s Boboli Gardens.

Model Oliver Cheshire, dapper in an on-point dove gray double-breasted suit, was proudly toting his prize: “I have a pretty good throwing arm so I had a go at the tomato cans and got myself a Celine bag,” he said in line for the Louis Vuitton kick-off.

Former Royal Ballet soloist Eric Underwood had nailed the theme in a sharp, peak-lapel suit, spats and a fedora. Assessing the Fendi Pineapple Shy, overseen by Mariacarla Boscono, he told WWD of his new career: movie star. He has been cast in the new film adaptation of “Cats,” directed by “Les Misérables” director Tom Hooper.

“Taylor Swift, Idris Elba, Judi Dench, Ian McKellen and Jason Derulo, Rebel Wilson and me!” he enthused. “I’m going to Cat School, learning the acts of cats, their natural way of moving; It’s a proper school, we have to do hours before filming. I’m like, ‘Is this Idris Elba I’m rubbing noses with?’ Oh, OK. Then I’ll be in the makeup room doing my makeup with Taylor Swift talking stuff about Netflix, like “The Ted Bundy Tapes.” It’s insane but amazing. But insane.”

“Spending your money tonight means that kids with special needs in Russia can have fun, too,” Vodianova said. “They’ll go to school, they’ll have friends and their families will be able to go back to work and enjoy normality again — this is what our work means to these families. So what could be more appropriate than a theme of La Dolce Vita? ‘The Good Life’ — that’s what we are trying to create by supporting children with special needs and their families.”

In his rustic baker boy hat and suspenders, Brooklyn Beckham was either dressed as a mid-century Roman bumpkin, or as Brooklyn Beckham. It was hard to tell. Rising musical talent Alice Chater was channeling Fellini’s seductive heroines in a sheer black bustier dress of unknown origin.

“I cut the tag out because it’s so sheer but my coat is from Roland Mouret,” she told WWD, adding that Mouret approached her after discovering her music, including the mesmerizing “Heartbreak Hotel,” which centers on a sample from Anita Ward’s “Ring My Bell.”

“I am collaborating with him on costumes for my performances and I’ll be singing at his next show,” added Chater, who was heading off to spend her tokens with R&B singer Sinéad Harnett. “He found me online and tracked me down. It’s special because as an emerging artist, I don’t have a million followers yet and some fashion brands will just look at the numbers, even though I’m signed to Virgin EMI. So it was really nice to be approached just because he spotted me and thinks I’m talented.”