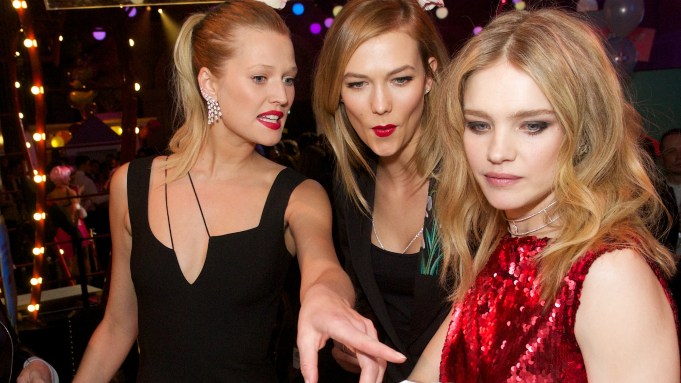 ROLL UP: Natalia Vodianova and Karlie Kloss reprised their roles as masters of the carnival for their second Fabulous Fund Fair in London, which was twice as big and just as much fun as last year.

They took over the cavernous Old Billingsgate Market, formerly London’s fish market, for the fair, which raised 835,000 pounds (about $1,2 million at current exchange) for the Naked Heart Foundation children’s charity.

Some 500 guests wandered from stand to stand, spending their carnival tokens on the kind of luxury experiences that only the significant clout of two supermodels could make happen.

They put their friends to work for the cause: Natasha Poly kept a close eye on the Repossi Hook-a-Duck pool; Ulyana Sergeenko put her Russian cooking skills to use at the blini bar; Stephen Jones lured people to his stand, where ping pong balls had to land in three pots of the same color in order to win a hat; Millie Mackintosh supervised the Dom Pérignon Champagne Hoopla stand; Stella McCartney, Tali Lennox and Amber Le Bon co-managed the Arcade Games; Ellen von Unwerth supervised the Rolls-Royce Dawn Drophead Photobooth; and Erin O’Connor oversaw the Dior Treasure Island Hunt, where guests had to dig through sand to find keys that unlocked the doors of miniature beach huts containing Dior goodies.

Mariacarla Boscono was manning the Givenchy Tattoo Parlor, where specially designed temporary tattoos were stenciled on to guests. “It’s been a bit tricky because it’s winter and people are so covered up,” said Boscono, who had a big black star on each shoulder blade. “But I talked a few men into opening their shirts and having big tattoos put on their hairy chests.”

Arizona Muse had been keeping a close eye on form at the Louis Vuitton Pop-a-Balloon Challenge. “People had to throw little yellow bean bags at the balloons to win Vuitton prizes but if even they tried to step over the line, I set them straight immediately,” she said. “There was no cheating on my watch.” She signed off from her duties close to midnight and said she would be blowing all her tokens on the bumper cars. “I can’t drive an actual car, so this is my only chance to get behind a wheel,” she added.

At the Calvin Klein Shooting Saloon, guests had to knock down three orchids with foam bullets to win fragrance prizes. “There were some terrible marksmen this evening,” said Royal Ballet star Eric Underwood, who had been marshaling the shooters. “The best shot of all was a hilarious Russian woman who just walked up to the stand, threw down a token and said, ‘Don’t worry, I am Russian, I don’t miss.'”

The evening’s hosts had also been hard at work, acting as bait in a special VIP area with a Wheel of Fortune, where guests had to spend 50,000 pounds (about $72,000) to try their luck at winning some extra special prizes. “We still have a lot of prizes left at the Wheel Of Fortune,” said Vodianova, in a red sequined Calvin Klein number. “For example, lunch with me and Mr. Valentino at his spectacular Château de Wideville. You might have been to the Love Ball there but he will give you a personal tour of his gardens. It’s worth trying!”

“It’s such a great party,” Arnault enthused. “So many charity dinners and auctions can be dull and you dread going to them, but this is the one party I really look forward to.”