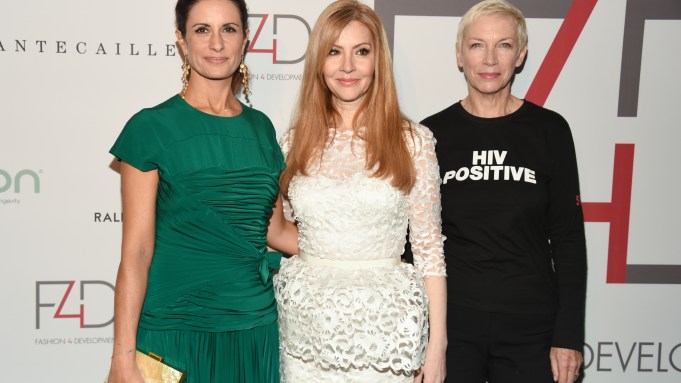 Before F4D founder Evie Evangelou started the awards ceremony at The Pierre hotel, one of the honorees, Natalia Vodianova, talked up her Elbi app and platform of charities and socially responsible brands aimed at encouraging Millennials to do good by simple gestures, such as sending a sick child a drawing for them to color in the hospital or making micro-donations.

“Five billion ‘like’ buttons are pressed on Facebook alone each day. If we could turn just 1 percent of those like buttons into love, we’d be generating incredible power behind great causes,” she said, referring to the option for micro-donations. “We hope Millennials will be the heart of Elbi. They don’t look at doing good as something you do at the end of the year or at the end of your life. It’s something to do now. We have impulsive shopping. Why don’t we have impulsive giving?”

Designer Tamara Ralph mingled with honorees like Suzy Amis Cameron, Unilever’s chief executive officer Paul Polman, Petra Nemcova and Annie Lennox (Nadja Swarovski could not be there to receive her award). Ralph was calm as can be even though her first non-Paris runway show for the Ralph & Russo collection would be held within the hour. In the next year, the company will open 11 stores in Asia, the Middle East and the U.S. including a Madison Avenue one. Ready-to-wear will launch next year, and cosmetics may follow, she said.

Cameron was in New York with her 6-foot-tall niece Audrey Amis, who is meeting with modeling agencies. It was a bit of a flashback for Cameron, a former Ford model, who also acted long before she founded Red Carpet Green Dress. Another sustainable-minded attendee, Livia Firth, said she is furthering her involvement with Chopard, Marks & Spencer, Kering, Stella McCartney and Gucci to work with trusted suppliers. In addition to supporting F4D honoree Annie Lennox’s Circle project, Firth said she is working on a “Social Media for Social Good” project with Stanford University.

With distribution in about 190 countries and 2 billion consumers using its products daily, Polman said, “What I’m thinking about more and more is, ‘How can we use that size and scale to drive more transformative changes to evolve capitalism to a better model?’ We have big initiatives for cutting out deforestation, moving to sustainable agriculture, cutting food waste, driving social compliance in our value chains, creating livelihoods. One of the biggest challenges we have with the forced revolution that is coming, for all its goodness, will probably also destroy a lot of jobs. We’ve made a commitment to create 5 million jobs, [for] women in particular, in about 10 years.”

Asked if Unilever will acquire Jessica Alba’s Honest Co., Polman said, “We never talk about what we do in the future. There are some parts of the business that you talk about the future — sustainable development goals… .”