The actresses chatted about kissing Dwayne Johnson and the challenges of writing. 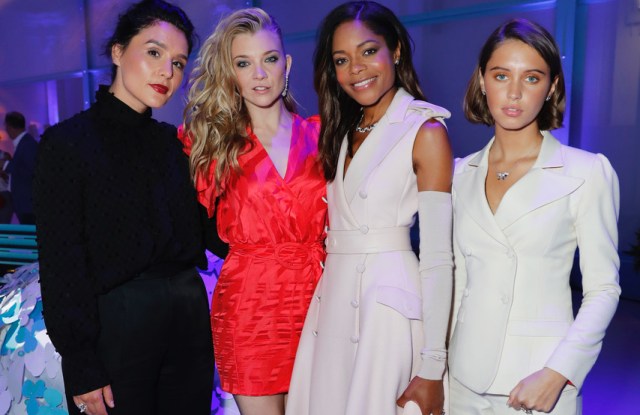 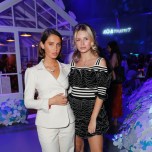 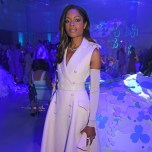 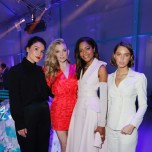 FLOWER POWER: Tiffany really leaned into its theme of the London launch of its new Paper Flowers collection, the first by chief artistic officer Reed Krakoff. Fittingly, the scene was set at the Royal Horticultural Halls, which was decked out with hundreds of supersized paper blooms, and countless British wildflowers, while the jewelry was displayed in a luminous garden shed, complete with Tiffany flowerpots.

Jessie Ware gave an intimate surprise performance, quipping midset that she’d “never performed for an audience where I know so many people in the crowd.”

Among them was actor Douglas Booth, recently back from wrapping on the Netflix biopic “The Dirt,” about heavy metal band Mötley Crüe, in which he plays band cofounder Nikki Sixx. Flashing pictures on his phone of him in character made up with full glam rock makeup and big hair, looking very thin, he explained, “He was a heroin addict, so I had to you lose lots of weight.”

Booth told WWD that the film is “a cautionary rags-to-riches tale. Defining genre of music, destroying themselves and imploding as a band.” Underlining his point, he showed another in-character image with hypodermic needles emerging from his chest. “Paramedics had to give him a double [‘Pulp Fiction’] Uma Thurman-style shot to the heart. He came back to life after two minutes.”

Natalie Dormer was channeling her “Hunger Games” character, Cressida, with hair swept to one side to better show off her spangly diamond Paper Flower earrings. The actress recently turned her hand to writing, penning the script for just-opened “In Darkness” with director Anthony Byrne, and found it more challenging than expected.

“It’s a whole new skill set, which is exposing in a whole different way [to acting],” she said. “When you’re the screenwriter, you learn that the thing that you think is poignant when you’re lying awake at three in the morning turns out to have lost its magical, emotional sheen on a page at 3 p.m. And you think, ‘This writing stuff is harder than I thought.'”

Other guests included Eleanor Tomlinson, Kaya Scodelario and Oscar-nominated Naomie Harris, who was singing the praises of her “Rampage” costar, Dwayne Johnson. Specifically, his lips. “I’ve been fortunate enough to kiss many, many Hollywood actors — in the movies — and I have to say he is the best kisser in the business. The best screen kiss ever.”