Natalie Joos and Friends Party Poolside at Jimmy; Towel Off at Jane

The style blogger and pals toasted a re-launched site with Style.com on Wednesday night. 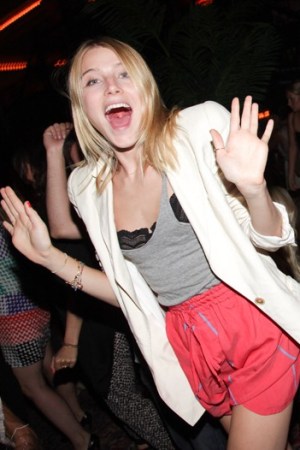 The common refrain at Style.com’s bash at Jimmy, the roof-top pool-centric space on the top of the James Hotel on Wednesday night, was aquatic in nature.

“When is this party going to kick off, and someone get in that pool?” was repeated in varying forms by revelers, who fanned themselves lightly, or pressed chilled beverages in plastic cups to their foreheads, necks and palms in order to combat the over-90 degree heat. Natalie Joos, in whose honor the fête was thrown, looked perfect poolside in a sky blue vintage caftan with beaded breastplate that swept out in the breeze. The party was to celebrate the re-launch of her Web site, Tales of Endearment, and her collaboration with Style.com, a “cross-pollination” by Joos’ account. Tales focuses on bright young things and their love of vintage threads, or as Joos explained, “girls who are in the public eye to some level, who are well-dressed, who love vintage. Generally they’re friends…or friends of friends.”

Revelers at Jimmy certainly fit the bill, with Erin Fetherston, Fabiola Beracasa, Giovanna Battaglia, Bonnie Morrison, Lisa Mayock and Genevieve Jones all showing up in vintage finds (as requested per the invitation) to show their support. Annabel Dexter-Jones, Joos’ most recent muse (who the casting-agent-turned-blogger described as “a real New Yorker,”) arrived in one of the mini-dresses she sported on the site, arm in arm with Andre Saraiva.

Prabal Gurung was on hand, receiving praise for his recent CFDA Swarovski award-win, charmingly attempting to deflect the attention.

“I never thought it would be me,” Gurung shrugged, before he was absorbed into a crowd of well-wishers. Yigal Azroeul posed for photographers on the deck while Christian Cota circulated, greeting Jeff Halmos, Anais Puoliot and Ataui Deng.

A bevy of models slowly trickled through, with Mirte Maas, Anna Selezneva and Linda Vojtova stopping to chat with Maria Cornejo and Nur Kahn, passing Max Snow, Waris Ahluwalia and Mark Borthwick. Behati Prinsloo held court on a daybed with boyfriend Jamie Strachan—until Strachan took the initiative, removed his shoes, and leapt into the pool to a flurry of hoots, hollers and camera flashes before being removed by security, who forced his hands behind his back as if handcuffs were to follow.

The variety of goings-on Wednesday night culminated late-night at the Jane Hotel, at the joint afterparty for Johan Lindeberg’s BLK DNM launch (another Style.com co-production). Revelers from the BLK DNM side of things arrived closer to midnight, fresh from a pop-up store opening on Lafayette and a dinner at Indochine, while earlier-arriving guests from Style.com’s shindig were a little…soggy. Strachan laughed off his forced removal.

“Just glad Behati [Prinsloo] got my shoes,” he laughed, dancing with Prinsloo as Nate Lowman DJed classic hits with a soul-flavor. Olivier Theyskens traipsed through the space with Frederic Dechnik, drinks in hand, and headed for a couch in the main ballroom near Lissy Trullie, while Cynthia Rowley and Bill Powers got comfortable at the bar. The space filled slowly but steadily, with the trickle of revelers becoming a deluge around 1 a.m. “I’m very happy about everything,” Johan Lindeberg explained, fireside in the ballroom, one arm reaching out to encircle a nearby friends waist. “It’s all very, very cool.”