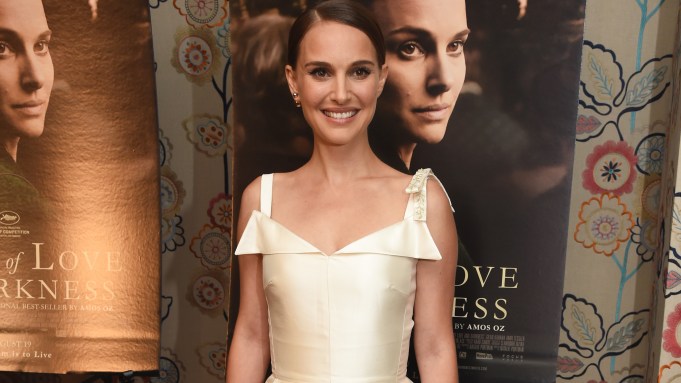 “It was really wonderful to sort of be forced to make my opinion known all day long,” said Natalie Portman, speaking from the carpet — quite literally a floor rug — in the basement of the Crosby Street Hotel on Monday night. The actress — and now, director — was discussing her latest project, “A Tale of Love and Darkness.” The film is an adaptation of Israeli writer Amos Oz’s best-selling 2002 memoir, and marks Portman’s feature directorial debut.

“I had always known I wanted to direct, but of course that it had to be something incredibly personal and passionate for me,” she said, ethereal in a white satin Dior gown. “And then when I read the book and I could visualize the film immediately I knew that was what I wanted to do.”

Besides directing, Portman also wrote the script and stars in the movie as Oz’s mother. “It sort of developed as a thing where I took on all of these roles,” she explained as an intimate crowd — consisting of America Olivo, Josh Bell, Molly Ringwald, Israeli Consul General Dani Dayan, among others — filed into the hotel to toast her project. “It was almost something I had to do in order to make the film. But it was wonderful too because I got into the film in such a deep way.”

The film chronicles Oz’s childhood during the Forties in Jerusalem, before and after the State of Israel was founded in 1948. It’s a coming-of-age tale set against a turbulent political backdrop.

“Amos was a great, great guide and friend throughout it, and was very supportive and also really encouraged me to make my own piece, which was really liberating,” Portman continued, discussing her written adaptation of the book. “He kept saying the book already exists, don’t just film the book. Make your own piece.”

RELATED STORY: Natalie Portman Takes on the Wild West in ‘Jane Got a Gun’ >>