Portman was joined by costar Joel Edgerton at the MoMA on Wednesday night. 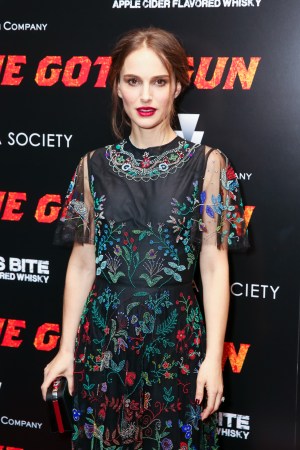 At Wednesday night’s premiere of “Jane Got a Gun,” a public relations crony was inching down the red carpet to reiterate the movie’s review embargo: no critical language of the movie anywhere — side-eye at you, social media — before the movie’s official Friday release. A few publications had already jumped the gun, and the reviews weren’t exactly glowing.

Still, an intimate crowd had trekked to MoMA for a new taste of the Old Wild West. Hosted by The Cinema Society, The Weinstein Company, and Serpent’s Bite, the screening drew out Gilles Mendel, Tali Lennox, Misha Nonoo, Paul Haggis, Krystal Joy Brown, and Jessica Joffe.

The movie had faced bigger problems than a few lukewarm reviews. For starters, the film’s original director, Lynn Ramsey, exited the project right before shooting was scheduled to begin. The casting then turned into a game of musical chairs, with several big names — Bradley Cooper, Jude Law — being swapped in and out. Post-production, the movie narrowly escaped from Relativity Films, and into Weinstein’s stable, just before Relativity filed for bankruptcy.

Despite all the setbacks, the movie’s leading woman never wavered. Natalie Portman, who helped produce it, stars in the titular role of Jane, who must defend her homestead and injured husband against an approaching gang of ruffians. She enlists a former lover, played by Joel Edgerton, for help.

“It’s such a great thing to get to put a woman in the West,” Portman said of the genre. “This lawless atmosphere and this vast empty landscape is such a symbol of independence and solitude. It’s the perfect place to put a woman who has to learn her own strength and independence.”

Let’s not forget about another leading character: the guns.

Despite the film’s shoot-outs, both Portman and Edgerton stressed their pro-gun control stance. “As a very laconic Australian comedian Jim Jefferies points out, it’s called an amendment, so why the f–k can’t it be amended?” Edgerton said, then paused. “Hopefully someone isn’t going to shoot me for my opinion.”