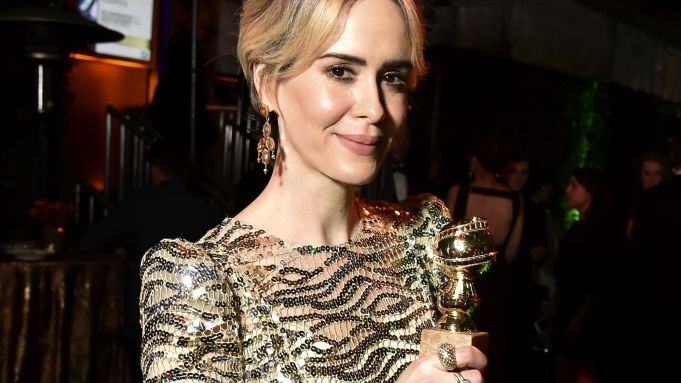 After “The People v. O.J. Simpson: American Crime Story” successfully made its case to take home the Golden Globe trophy for Best Limited Series Made for Television, the cast and creators adjourned to Fox and the series’ home network FX’s official after party in a pavilion erected outside the Beverly Hilton.

Following a lavish viewing party in the space, “People v. O.J.” star John Travolta and his wife Kelly Preston arrived early and held court stylishly in an expansive corner furnished with sleek minimalist sofas as executive producer Ryan Murphy and costar Sarah Paulson (in her sparkly — and Golden Globes-complementary — Marc Jacobs gown) swung by toting their newly snagged trophies, and the show’s titular accused, aka actor Cuba Gooding Jr. cut up a surrounding swath of chuckling executives with his energetic antics as a mix of Eighties pop and of-the-moment dance hits kept the crowd moving to the beats.

“O.J.” costar Sterling K. Brown celebrated nearby with his other TV family, the “This Is Us” cast (produced by 20th Century Fox Television). Mandy Moore made a dramatic entrance, fiercely working the cape of her plunging Naeem Khan gown on the red carpet; Chrissy Metz, in purple Christian Siriano, commandeered a couch to receive well-wishers while her costar Globes carpool buddy Chris Sullivan worked his flashy formalwear for all it was worth and cast mates Milo Ventimiglia and Justin Hartley gathered at the center Patron tequila bar to peruse potential libations.

Meanwhile, “Atlanta’s” Donald Glover was double-fisting Golden Globes as he attempted to weave through the crowd, barely able to take more than three steps in any direction without being stopped to be congratulated (and pose for selfies); Lea Michele offered up a sultry series of poses for a gaggle of flashbulb-popping photogs, deftly rocking a shimmery lavender Ungaro gown, and “The Americans” husband-and-wife spies Matthew Rhys and Keri Russell were anything but undercover, lip-locking unabashedly. While “Jackie” star Natalie Portman wasn’t carrying a trophy, she was most definitely carrying a more precious gift and the actress was practically beaming as security helped her navigate out of the party, offering First Lady-esque waves and bright smiles to the friends she spotted as she exited.