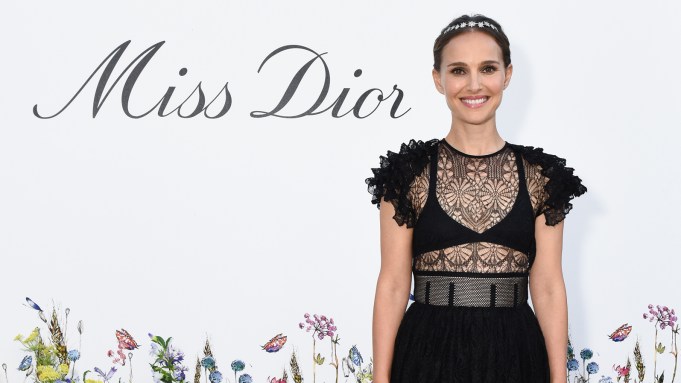 “It’s such a pleasure and luxury to get to be around people again,” said Natalie Portman on Friday evening at the unveiling of Dior’s “Millefiori” pop-up, held in celebration of the French luxury house’s latest incarnation of its Miss Dior fragrance.

Portman, the face of the scent, was with husband Benjamin Millepied; the two were expecting friends to join them, she said: “I’m excited to see them and have a drink together after, you know, a long time of being antisocial.”

Masks were off as guests, in high spirits, mingled in the space and its rooftop. Featuring an exhibition, open to the public all week at 8552 Melrose Avenue, the pop-up is a recreation of the Miss Dior universe.

“It’s almost like synesthesia, like a visual representation of a smell, you know, an artistic expression of film,” she said of the activation, which features her Miss Dior campaign ad on loop. In it, she’s immersed in nature, running free.

“It’s a real return to beauty and joy after such a difficult time, I think, in the world,” she said of the messaging behind the fragrance. “And during difficult times you embrace the senses and embrace, you know, our humanity as sensual creatures that appreciate beauty in whatever form it takes. And, of course, a return to nature, too, and there’s such attention to nature with the new packaging and the bottle and everything and the ingredients that Dior has been really thoughtful about. So I think that having it be outside with the trees and the flowers in the fields, it feels really relevant to the product itself, too.”

The essence is tied to its past, she continued. “With Christian Dior and his sister being part of the resistance in [World War II]. Having this history of freedom and joy and resistance to the horrors that humans can create is such a beautiful legacy to uphold. And unfortunately, it’s still relevant today. But, you know, it’s kind of an answer to the horrors of the world — to emphasize our love of beauty.”

She, like all the VIPs, was decked out in Dior. She had on a black lace top and skirt from the brand’s fall 2022 collection.

“It’s been incredible and so rare to be with a brand for that long,” she said of her long-standing relationship with Dior. It was in 2011 that she became the face of Miss Dior. “I think it speaks really about the family environment and nature of the company, and it’s been such a wonderful experience getting to visit the rose fields in Grasse and the atelier for couture and meet [creative director] Maria Grazia [Chiuri] and the nose who designs all the perfumes — to see all the levels of artisanship and expertise, and every level has been just such a lucky opportunity.”

“It came together in the fitting,” said the actress of the look, noting she’s been wearing Miss Dior for years.

What makes her a fan of Dior?

“There’s something whimsical and strong,” she said of the brand. Rising to fame following “Big Little Lies,” Newton will be seen in Marvel’s upcoming “Ant-Man and the Wasp: Quantumania.” “There’s a fierceness and femininity.”

“I love a good, effortless fashionable, streetwear moment,” said the actress, who will next be seen in the series “The First Lady” (where she plays Malia Obama), as well as star in “Sneakerella.”

“It’s so me,” she said of her outfit. She works with stylist Ashley Sean Thomas. “Whenever I’m dressing, I feel like that’s the number-one thing, to stay authentic to who I want to be.”

“Yeah, grungy,” she purred. She had on a maxiskirt and graphic sweater with “Non,” French for no, repeatedly written across. “It says non, non, non.”

Zouai, one to watch in the world of music, performed at the previous Miss Dior pop-up in New York.

“It’s stunning,” she said of the L.A. space. “Beautiful, the flowers. And it smells good. Good vibes.”