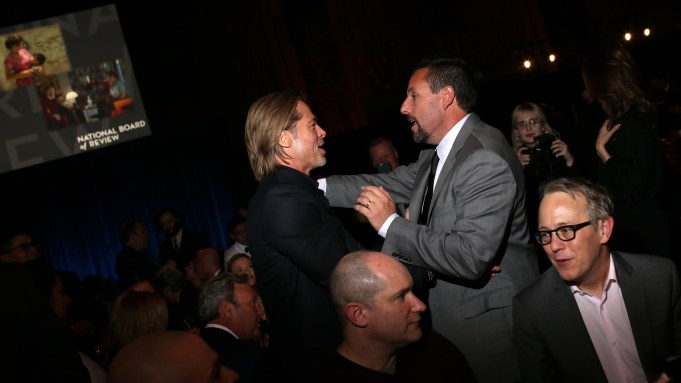 “My wife’s been talking about me taking her here for years, and here we are,” said Adam Sandler, glancing up into the vaulted ceiling of Cipriani 42. “And it’s gorgeous, and now I get it.”

All it took was Sandler winning a best actor award to get him there. Three days after the Golden Globes, the next round of film accolades were already being doled out. The National Board of Review Awards are a decidedly less stressful event, though: all the winners already knew that they’d won.

“I did win! That’s good news,” said Sandler, the lead of Benny and Josh Safdie’s “Uncut Gems.” “Tonight’s a biggie. Tonight’s so cool.”

All around him, the room was packed with Hollywood royalty. In addition to the night’s honorees — Brad Pitt, Quentin Tarantino, Kathy Bates, Renée Zellweger, Robert De Niro and Martin Scorsese, among others — presenters included Bradley Cooper, Salma Hayek, Drew Barrymore, Timothée Chalamet, and Bruce Springsteen, who presented the NBR Icon Award to De Niro, Scorsese, and Al Pacino (who wasn’t there but present in, as De Niro put it, “holy spirit.”)

“I loved Pitt — ‘Ad Astra,’ Pitt was incredible in that. And ‘Marriage Story,’ I loved, and ‘The Irishman,’ and ‘Honey Boy’ I loved,” said Sandler, recounting a few of his personal favorites of the past year “Every [film screener] they give ya, you put it in and you go, ‘oh, that’s the best movie I’ve ever seen.’ There are so many great ones. ‘Parasite’ is a 12, that’s a movie I loved. Bong is the best, I love that guy.”

Director Bong Joon-Ho was nearby with two of his “Parasite” stars, who had also accompanied him to the Golden Globes a few days before. Actress Jeong-eun Lee noted that for her, a highlight of Sunday’s ceremony was stopping by the bathroom.

“She went to the bathroom and got to see all the great celebrities she’d never come across in Korea, like Annette Bening and Scarlett Johannson,” said the trio’s translator.

The nomination season is still young, and she’s likely to encounter similar moments in the month ahead. But her costar Kang-ho Song is looking forward to a different star-studded moment.

“Director Bong holding an Oscar trophy at the Academy Awards,” he said, which the director quickly deflected.

“We don’t know,” Bong said. Busy or not, the director’s still finding time to write: he’s been working on his next script in his hotel rooms by writing for five minutes before going to bed.

It’s the sort of commitment that many in the room could surely relate to.

“The real reward  — and most actors really mean this when they say it — is getting to do the movie and getting the part and getting to finish it,” said “Just Mercy” actor Tim Blake Nelson. While he’s mostly made his way through the past year’s slate of buzzy films, there’s a major one still on his list.

That movie’s cinematographer Roger Deakins (who was the first winner to arrive, promptly at 6 p.m.) was picking up the NBR honor for best cinematography on Wednesday night, and is also a Academy Award front-runner. Although “1917” is off to a promising start — it won best drama film on Sunday night — Deakins wasn’t even aware of the win until the next day. “[My wife and I] went out and saw ‘Ford v. Ferrari’ that day. I didn’t find out until the morning, I don’t think. I mean, I wasn’t watching [the ceremony].”

Next on his to-watch list is “Beanpole,” which features the work of 25-year-old female DP, Ksenia Sereda.

“The most fun part is meeting people I admire or getting a chance to tell them sometimes in person — sometimes just being in the same room as them,” said Bates of being involved in the awards season push for her role in “Richard Jewell.” “Not to sound too weird about it, but I’m very pleased to be included in the dance at my age; to be here and feel really proud of this job I did on the film.”

The convivial spirit continued throughout the night, with actors and directors lavishing praise on each other.

Cooper, who introduced Pitt for the best supporting actor award, shared a story of returning a jacket he’d accidentally left behind after a Los Angeles Philharmonic concert last summer.

“I went home with Brad Pitt’s jacket, and I’m not going to lie to you, I tried it on. And you know what? It felt really good,” Cooper told the Cipriani crowd. “And that’s the power of Brad Pitt.”

“Well,” said Pitt, considering the curved glass trophy. “It’s nice being able to leave this thing carrying something other than George Clooney.”

Quentin Tarantino, one of the last winners of the evening, took a moment to recognize all of the other great directors in the room. Chalamet, who was sitting at an “Uncut Gems” table, turned around with a smile and pointed at director Bong one table over. The director, who after Sandler’s speech unwrapped the “Uncut Gems” soundtrack from the table’s centerpiece, a smattering of film paraphernalia and film screeners, pointed right back at him.