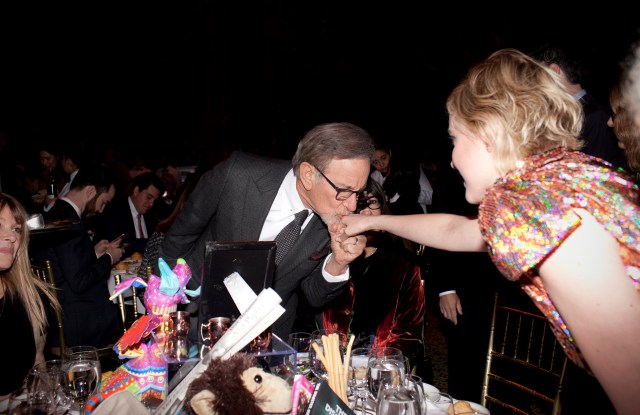 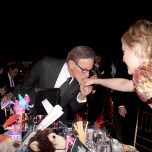 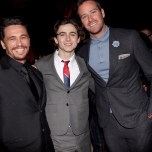 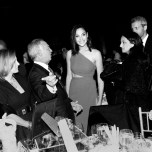 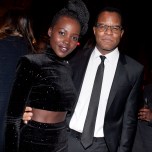 The “year of the woman,” as Meryl Streep put it Tuesday evening onstage at the National Board of Review gala in Manhattan, rages on through the awards season circuit.

Perhaps Hollywood is saving their strength for the month-plus of awards season still to come; the majority of the evening’s attendees slid past reporters on the carpet, some skipping the photo stop as well. But inside, the atmosphere was casual and unguarded near the open bar. Streep mingled with Hammer and his wife, Elizabeth Chambers. Chalamet, belle of the ball, was the face everyone wanted to chat up. James Franco — notably absent from the carpet as accusations of sexual harassment have emerged following the Golden Globes, which he has denied — was spotted in whispered conversation with Hammer. His brother, Dave, was nearby, huddled with his own posse. Gerwig, circling the tables, was adorably excited as Spielberg bent to kiss her hand across the table.

The all-black dress code from Sunday’s Golden Globes partially carried over on Tuesday — Jolie, Streep, Jenkins, Julianna Margulies, Tina Fey, Lupita Nyong’o and Isabelle Huppert all wore the shade — yet it was far from the definite intention of Sunday’s movement.

Instead, the night was one for getting to profess admiration for your heroes. Gerwig called out the first female director who had an impact on her, Claire Denis and her film “Beau Travail,” and praised an early meeting she had with Jenkins several years ago, saying “I walked away and I thought, ‘I want to be like that woman.” “Hi Steven Spielberg,” Peele said in the midst of his acceptance speech for best directorial debut. Chalamet’s hero, Anderson, was in the audience, and got his own shoutout. “I guess there’s something nice about getting to hear your own voice shouting out your hero, in front of your hero,” Chalamet said in his speech.

Streep began her speech with a declaration of her love for men, perhaps to the surprise of the audience. “I love men. Oh my god. Yeah, I know it’s the year of the woman and everything, but oh my god, the men,” she began. “All my mentors have been men.”

She went on to name the women who were influential in the making of “The Post,” which was honored as the evening’s best film, and to deliver a rallying call to the women in the audience.

“Five days ago we were in San Francisco and Daniel Ellsberg was there, full of fire, and he said, ‘You know, this moment, this moment for women, this ‘me too,’ this ‘time’s up,’ this is your Pentagon Papers,’” she said, as applause began. “And the time’s up, so let’s go girls.”

Giving Back Through Food: Camilla Marcus Opens ‘West-bourne’ in SoHo