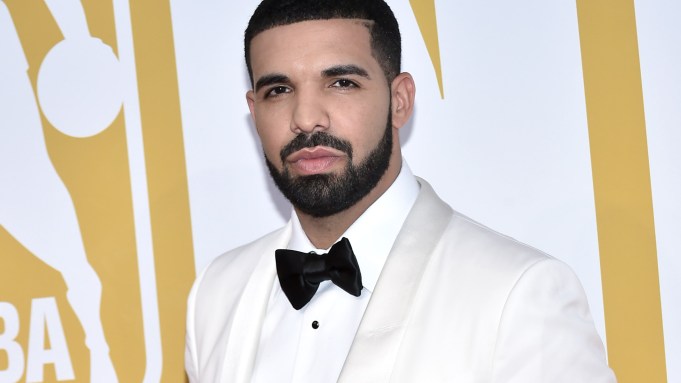 If you want to get an NBA athlete’s attention, ask him to show you his shoes. This red-carpet pro tip worked for TNT, which set up a full-on kick cam at the inaugural NBA Awards, stopping everyone from Shaquille O’Neal to James Harden to Draymond Green. All happily showed off their foot attire for the sake of TV, but elsewhere on the carpet, the majority of attendees weren’t talking.

Such is life when your makeshift “kick cam” is your iPhone and your “crew” is you and a recorder. Monica Brown, Fabolous, 2 Chainz, Jada Pinkett Smith, Naomi Campbell and host Drake, who breezed by reporters without a commotion as if he wasn’t, in fact, Drake, were among the silent ones. Hailey Baldwin was for a moment, but she at least gave a clue as to why when she yelled, “Thank E! for ruining it for the rest of you.” Ah, the drama of the carpet.

“It’d be really nice to see more people get accolades tonight,” said Damaris Lewis, the evening’s official trophy presenter. “There’s gonna be a little more than the usual. Generally, you just see MVP and MVP of the season and of the finals, but now you have all these different things that [athletes] can get awarded for and I think it’s great because they do so much and they work so hard.” Lewis appropriately chose a beaded, gladiator-inspired dress by Sophie Theallet, which she said had all been made by hand — and weighed 20 pounds.

“Who’s performing?” asked a spacey Bryshere Gray, who had performed at the BET Awards the night before (and perhaps hadn’t yet recovered). Nicki Minaj was the featured performer that evening.

“Who else?” he asked, unaware that Drake was the host. “I didn’t know who was going on, I just knew I was presenting. That’s dope, that’s gonna be amazing to see. [Drake’s] funny, so. Got dope music, too.”

Both Lewis and Gray named Russell Westbrook as their picks for the most stylish NBA athlete, and Westbrook actually won the award for Best Style, as well as Kia NBA Most Valuable Player, later that night. Gray’s “Empire” costar Jussie Smollett, however, had someone else in mind for the title.

“I still say that Dwyane Wade is rocking it,” said Smollett. “Dwyane Wade rocks anything, y’all. I don’t know if Gabrielle Union got him together or I don’t know if he was like that before, but they’re like the Obamas of the NBA. They kill it each time.”

G-Eazy was most excited about who was going to win the coveted MVP award. “It was such an exciting season, it was unique in terms of all the triple-doubles, so many records being broken and all of that,” he said, correctly guessing Westbrook would be the recipient. He, too, agreed that Westbrook was also the most fashionable NBA athlete, describing his style as “loud and flamboyant” in stark contrast to his own — “Saint Laurent and a whole lot of black.”

“I want to see everybody have a great time,” said John Wall of the Washington Wizards. “I think it’s very unique they’re doing it like this. I think what the NBA can do is try to move it forward a little bit so it don’t be so close to like free agency and all of that. But I think it’s gonna be great, it’s gonna be exciting and I hope everybody has fun.”

Wall added that if he could redesign his uniform, he’d make it closer to the body. “Fitted,” he said. “I want it fitted. Tank top-wise and fitted. I don’t like these sleeve jerseys.” Point taken.

Meet Angel and Dren, the Twin DJs Serving Beats to the Fashion Crowd

Ruth Negga, on the Road Again