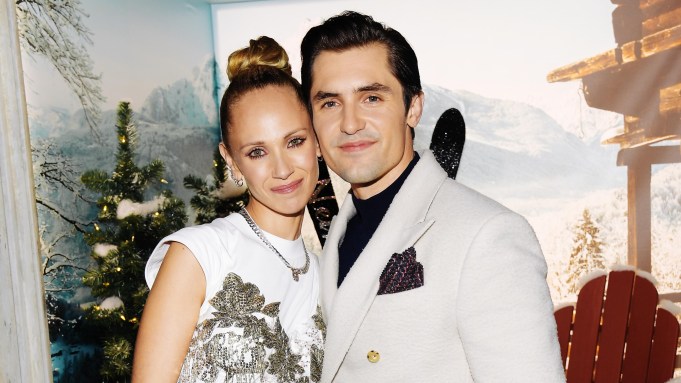 “I was personally shocked to see Santa this early in the season, and it felt like a big event,” mused Natasha Lyonne at Neiman Marcus’ “Celebrate Big, Love Even Bigger” holiday fete on Tuesday night in Los Angeles.

“I realized that I had not seen Santa Claus in the flesh in years, and I missed him,” she went on, half-jokingly while putting on a voice. She was standing alongside fellow actress and filmmaker Miranda July who listened, amused. “I really did. I thought to myself, ‘Thank God Santa’s back.’ You know what I mean? Because Santa is one of the major players of the holiday season. Star-studded.”

“He’s the Jesus Christ of the holiday season,” chimed in July.

“The Jesus Christ of the holiday season said Miranda July,” echoed Lyonne. “Yes, yes, it’s true. He’s basically the Jesus of Christmas. So, it’s a very big deal when you think about it.”

“From our Jewish perspectives.”

“Yes, speaking as a pair of Jews here at the Santa Claus party.”

The bearded man in the red and white suit was certainly a star of the night, continuously asked to pose for selfies with guests — who brought out their most festive attires for the occasion.

The party was held to spotlight Neiman Marcus’ fantasy gifts as part of the luxury retailer’s holiday campaign. Taking over the entrance of the Paramount Pictures lot, seven curated vignettes were prominently displayed. Each one, dedicated to a theme aligned with the respective gift, housed props and a model, while presenting a QR code for attendees to learn more. By far the biggest attraction was the box spotlighting a 30.86-carat heart-shaped Mughal diamond, priced at $6.1 million (the lineup also included a $395,000, Bronson van Wyck-hosted Roaring Twenties party at Harlem’s Apollo Theater and $235,000 ski experience with Olympian Lindsey Vonn at Caldera House in Wyoming).

“Jokingly, I think New York might be the Big Apple, and Texas is a pretty big state, but when it comes to love, you got to go to L.A.,” said Neiman Marcus’ chief marketing officer Darren “Daz” McColl.

“The fantasy gifts are a long tradition,” he added. “I think it’s the 62nd year, and it’s a process to really curate those gifts, because they’re so special.…Customers are wanting to celebrate again.”

Of the upcoming holiday season, normally the busiest time of year for retailers, he said: “I think it’s going to be great. I just encourage all of our customers and everyone to think about shopping early, because we all know that the supply chain systems that everyone always took for granted are going be challenged this year like they were last year.”

“To me, it’s really about honing Neiman’s fashion point of view and also bringing light to some of those lifestyle categories, whether it’s beauty, whether it’s home, kids’,” she said of her vision ahead. “It’s how you bring all of that together.…I think what Neiman’s has always had is this sense of glamour and sense of enthusiasm for fashion, where you can be so unabashed in your love of bold fashion. That’s where Neiman’s takes its place. But we can push that agenda much further.”

“I love Christmas, and I love the giving of gifts, but also, I love the festive period, so the fact that we’re starting in October, I’m here for it,” said Dunster of celebrating the holidays a little early this year.

“It’s a wonderful experience,” he said of the success of the show. “And the response has been incredible. To be honest, without being too cliché, it’s just good to work with those people. And getting to work with them again and again has just been such an honor. I love them. It’s good work by good people, and I’m just happy to be hanging on to their coattails.”

The cast, led by actor and creator Jason Sudeikis, will soon reunite to film the third season.

“We’re going back in January,” revealed Temple, who had on a beaded Alexander McQueen number, worn over Wolford tights, with chunky black boots and two mini-sized bags by Versace.

“I feel like I was a princess that went through kind of a shipwreck. Right?” she said of her look with a laugh. “I’m obsessed with tiny bags. And I have been for years. I’ve got a lot of them.”

Dangling the smallest one in hand, she added, “But this might be the greatest one I’ve ever seen.”

She was looking forward to catching up with Dunster, she said (“He’s in England, and I live out here”) and returning to set. It’s been fulfilling being part of a project such as “Ted Lasso,” one that has resonated with audiences during a particularly challenging time amid the pandemic.

“Guess what? Keeley saved my ass, too,” she said of her character, Keeley Jones. “I mean, I struggled with a lot of things going on in my brain, you know? And Keeley is somebody that has this extraordinary heart and this real desire to help people see the best in themselves — and really nurture that and love that from an exterior place, so that they can really learn about it and feel it and start to inhabit it, too. To play a character like that taught me to be kinder to myself.…It’s a show about looking at life with a glass half-full perspective.”