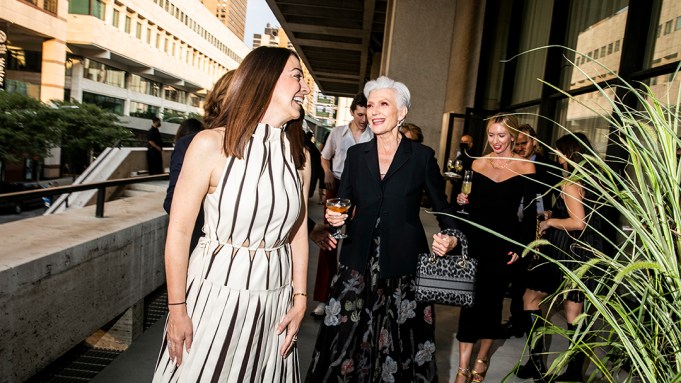 How would you like to reintroduce yourself to the world? Neiman Marcus gave guests an opportunity to mull the question on the final night of New York Fashion Week.

The retailer hosted an intimate cocktail party outside at the New York Public Library for the Performing Arts Lincoln Center, drawing industry guests including Wes Gordon, Jason Wu and Gigi Burris. In addition to celebrating fashion week, the party toasted the retailer’s “Reintroduce Yourself” fall campaign and welcomed its new fashion and lifestyle director Lisa Aiken.

The fall campaign, which invites customers to consider how they’ve changed over the past year, prominently features an open door frame — a symbol of reentry. Similar open-door installations were situated across on the terrace, a direct link between the party and campaign.

“It was very much about getting dressed again, this is who I am, and celebrating being around people,” Aiken said of the campaign. “I think all of us have changed in every sense,” she added. “On a personal level, our style of interacting with people has changed. We’re more thoughtful and considerate and present, and spend time with people. And then in a fashion sense, I definitely think it’s more considerate purchasing. But that doesn’t mean safe — that means emotional, that means things you fall in love with and you’re willing to invest in,” she continued. “That’s what we saw from the collections, and that’s what ultimately will hit the shop floor in six months.”

Aiken praised recently collections by Peter Do, Khaite, Rodarte and Wes Gordon’s 40th anniversary show for Carolina Herrera as standouts of the week. “It’s a very feminine season. I was joking, like, ‘Have we seen any pants on the runway?’ I’ve seen maybe three pairs of trousers. It’s definitely a very optimistic and bright season.”

A group of Juilliard students regaled the crowd with string renditions of popular songs, and guests played a Neiman Marcus Plinko board to benefit a group of charities. Toward the end of the evening, trays of the store’s infamous chocolate chip cookies were passed around.

“It’s been terrific, it’s been really amazing, it’s almost like a reunion with old friends,” said president and chief merchant officer Lana Todorovich of the week, who described the collections as vibrant and joyous. “It’s borderline emotional to be sitting in the front row and share the joy of fashion with others. You can see it’s more than a fashion show — people are rejoicing to get together again,” she added.