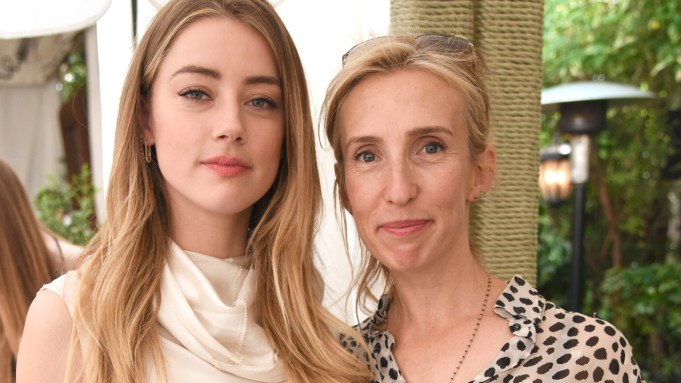 Guests squeezed into and swarmed the garden of the Chateau Marmont Friday afternoon, clinging to what shade they could find along the perimeter for Net-a-porter’s “Women Behind the Lens” luncheon.

The event was to celebrate women in fashion, film and photography, along with the release of the spring issue of Net-a-porter’s magazine Porter. Originally set to be an intimate affair in the West Hollywood hotel’s party penthouse, Number 64, the 120-person guest list seemed cause enough to move to a larger setting on the property.

With most of the town looking to latch on to some tie-in with Oscar weekend, Net-a-porter was no different, especially after success hosting a similar luncheon last year with Tilbury.

The current issue of Porter magazine features page after page shot by female photographers, Yeomans pointed out before turning to the tables adorned with clusters of white roses to snap a picture of her own for Instagram.

Yeomans has a packed schedule, including the Armani party Saturday and then a Chanel-hosted dinner before settling down on a plane Sunday afternoon to get back in time for Paris Fashion Week.

For Valletta, she’ll make the rounds at a few Oscar parties, “the usual,” she said, but “it’s also a beautiful weekend so I’m going to hopefully get outside with my kid and have fun.”

Valletta is on the cover of the spring issue and leapt at the chance to work with photographer Collier Schorr.

“She’s just an incredible female photographer and artist so I was super excited about that and it was a really easy, beautiful shoot and Collier’s process is really organic and mellow,” she said.

The compliments seemed to be flowing throughout the garden as guests waited for a lunch of avocado tartine, white sea bass and chicken paillard followed by cookies and petit fours.

Actress Phoebe Tonkin said she was wooed to the lunch by de Cadenet. “I’ve known Amanda for a few years and I just think she’s so incredibly inspiring and strong and anything that she’s involved in is obviously going to be incredible and I just think it’s a really great time to champion women right now.”