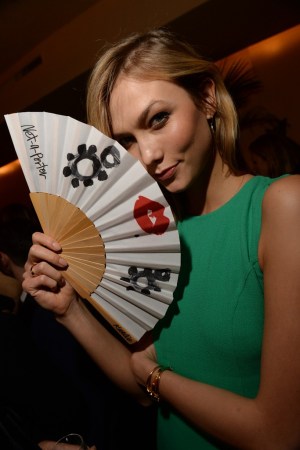 In August of last year, Sarah Rutson, Lane Crawford’s very prominent fashion director, left the Hong Kong retailer where she had spent, on and off, roughly 20 years of her career. By the end of the year she had reemerged at Net-a-porter with a bigger, badder title — to be based in New York, curiously — although she didn’t have her official coming out to the Manhattan fashion establishment until Tuesday night, a little more than a month into her tenure.

Before a crowd that included Aerin Lauder, Tory Burch, Pierre-Yves Roussel of LVMH Moët Hennessy Louis Vuitton, Karlie Kloss, Jason Wu, and a lot, a lot of editors, Natalie Massenet picked Indochine, as a nod to Rutson’s years in Asia, to throw her new vice president of global buying a dinner worthy of a debutante with a very bright future ahead of her.

Not that Rutson needed any introduction. She’s an insider’s insider who in later years savvily became a fixture of street-style blogs with her striking fashion sense. In Rutson, Massenet found another scrappy contemporary who slowly climbed the ranks year after year.

“We were laughing about when we started out we were in the third row and then second row,” Massenet said.

Rutson’s time at Lane Crawford, which she helped expand into mainland China, is useful to a retailer eager to expand beyond the United States, Net-a-porter’s biggest market. But that her home base is New York, and not at the headquarters in London, is also a significant signal.

“Manhattan is our biggest city. Having her here on the ground, representing the company and working with the designers is really one of our best investments in the market,” Massenet said. “And she’s a fantastic brand ambassador and I hope she enjoys New York.”

Rutson herself was discreet about her plans for the company. “Honestly, all I can do is add to the excitement that is already being created and build on it. It’s 37 days,” she said. “You ain’t seen nothing yet.”

Had she yet found a place?

“Absolutely,” she said. “Sixteenth between Sixth and Seventh. I’m a Chelsea girl. I came from Chelsea in London and then, voilà.”