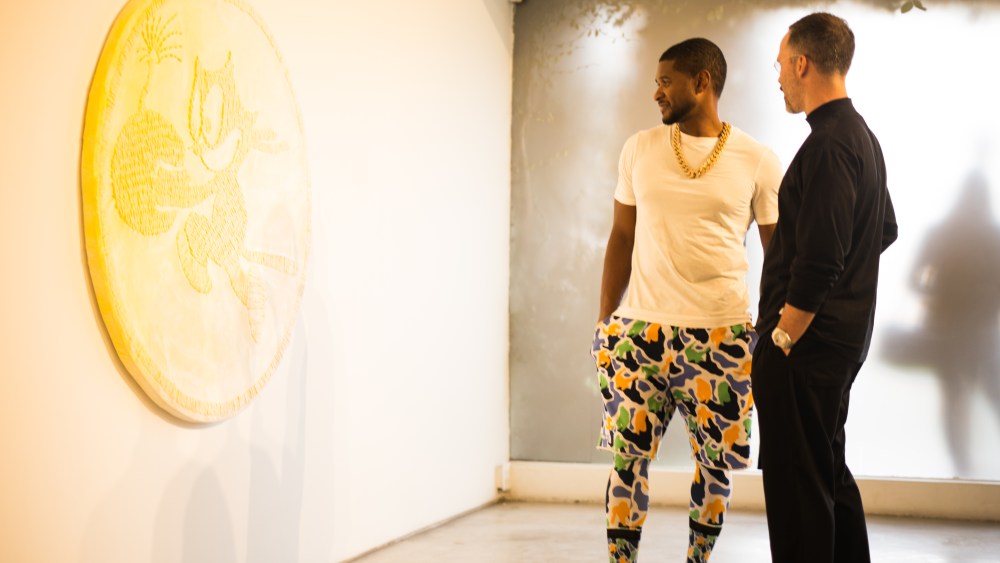 Nostalgia for the Nineties doesn’t seem to be going anywhere.

A new series by contemporary artist Daniel Ashram showing at the Morán Morán gallery in Los Angeles, including large-scale plaster casts of vintage patches featuring Bart Simpson, Bugs Bunny and Felix the Cat, proved to be a weekend draw for a mix of cool fashion industry-types from Usher to streetwear designer Chris Stamp and photographer and footwear designer Rocky Xu. They all gathered after an opening party at the Chateau Marmont for a dinner hosted by the American Express “Platinum Collective,” the financial company’s influencer-driven initiative.

Ashram, who’s based in New York and cofounded Snarkitecture, a design and architecture firm that’s worked with brands like Kith, Valextra and COS, is colorblind, which he said lent itself to the light and gradient colors on his new pieces.

“I compensated for my lack of understanding the universe of color by viewing my surroundings in terms of light and shadows,” Ashram said.

But the cartoon plaster casts are only one half of the exhibition. The other half is an exploration of “the angle of repose,” through piles of sand in a Fibonacci pattern that surround a sculpture of the moon. Fibonacci numbers are those that equal the sum of the preceding two numbers in a sequence, and can be plotted out to form pairs. The angle of repose is generally known as the steepest angle where an object, or in the case of Ashram’s work a granular material, can rest without sliding down.

“The shape that these piles of sand form is defined by the angle of repose: the finer the sand, the higher a peak it can achieve; the more coarse the texture, the shallower the peak,” Ashram explained. “This is a rare occasion where you are able to view physical properties of a material based on what the material wants to do itself. The form defines the shape.”