The evening honored artists Njideka Akunyili Crosby and Josh Kline, both featured in the New Museum Triennial earlier this year. 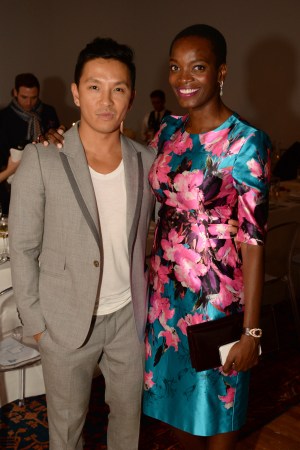 This year’s iteration of New Museum’s Next Generation Dinner was a steamy affair.

“When I did my makeup I put everything waterproof on tonight,” said Fabiola Beracasa-Beckman, a host of the event along with Massimiliano Gioni, Prabal Gurung and Vanessa Traina Snow. “I was like, if it’s a bath house, I might get really hot.” She was speaking from the humid basement of Bathhouse Studios in the East Village, where the New Museum had taken up residence for the night to honor two emerging artists. The location was once home to an actual public bathhouse, and the space had been decorated accordingly: Turkish rugs lined the floors, Suzani wall-hangings adorned the walls, and Moorish furniture provided respite for guests who’d chosen poor footwear. A strong downtown crowd came out to show their support for the initiative, including Jen Brill, Lazaro Hernandez, Christina Ricci, Maria Baibakova, Jessica Joffe, Liya Kebede, Olympia Scarry, Cleo Wade, and Tali Lennox.

The annual dinner was being held off-site for the first time, and the new venue proved slightly inconvenient for one of the hosts. “The New Museum is a neighborhood museum that I’ve always gone to — I live right across from it,” said Gurung, who slinked into the pre-dinner cocktail with Christina Ricci on his arm. She wasn’t the only woman in the room wearing the host’s design — honored artist Njideka Akunyili Crosby was stunning in a teal and pink floral frock.

“This is what I love most in my closet, and I was already planning to wear it,” said Akunyili Crosby, who was being recognized at the dinner along with Josh Kline. She had also donned the outfit earlier that year at the New Museum Triennial, where she and Kline were both featured. Akunyili Crosby noted that she’d been chosen for the Triennial by New Museum curator Lauren Cornell, whom she’d met the day before an extended trip to India. “It ended up being somewhat high drama because I was just about to leave the country,” Akunyili Crosby explained. “If she didn’t come to my studio that afternoon, we wouldn’t have seen each other for the next couple of months.”

Like so many things in New York, timing is everything.