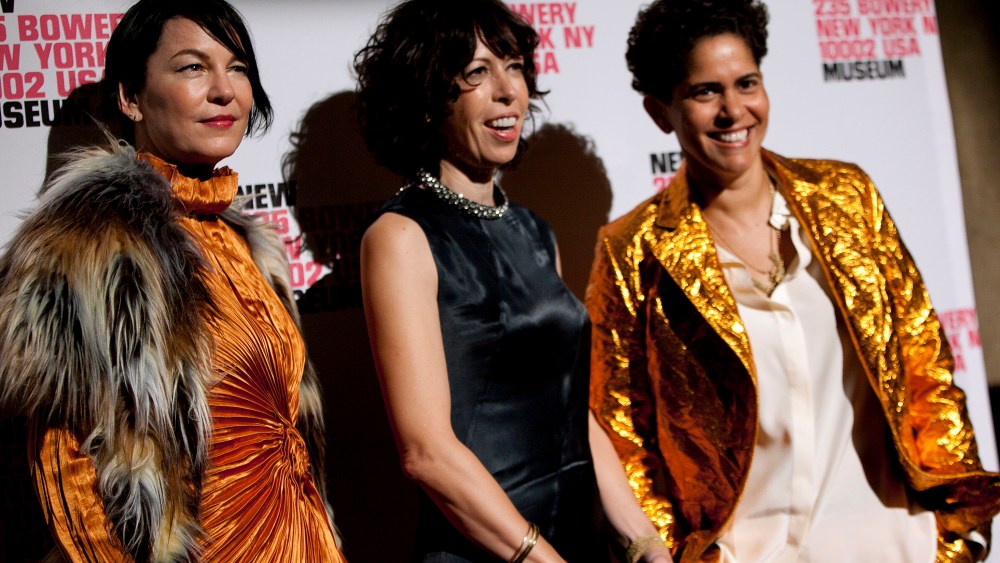 NEW YORK — “Let’s just say it’s not our first rodeo,” remarked New Museum director Lisa Phillips of the downtown Manhattan institution’s annual spring gala held Wednesday evening at Cipriani Wall Street. The themed fete — this year, guests were encouraged to “get your sparkle on” — marked the 19th such celebration for the museum leader who used the glittering evening to comment on the current political and social climate. This year’s edition raised more than $2 million.

Cecily Brown, Julie Mehretu and Elizabeth Peyton were among the three artists honored by the museum with Phillips adding, “We have to take every opportunity to recognize those courageous women in our field who have made real changes to the landscape.”

Also recognized as honorary chairs for the evening were gallerists Paula Cooper, Barbara Gladstone and Marian Goodman, a group whom the contemporary art doyenne described as “six amazing women we celebrate tonight for their courage, their work and their lasting contribution to our field.”

Guests including Michael Stipe, Cindy Sherman, Agnes Gund, Eva Franch Gilabert and Marilyn Minter formed a sea of sparkles as they floated into the ornately appointed room during the cocktail hour. Meanwhile, the three honorees sequestered themselves to a balcony-level table in final preparation of their joint acceptance speech.

Wearing a signature baseball cap, pop artist and designer Brian Donnelly — known professionally as KAWS — reflected on being among the more than 50 artists in the room. “I’m just happy to come out and support,” said Donnelly, who recently returned from a trip to Asia, the Middle East and Australia ahead of work on a New York show to debut in November.

John Waters gazed at some of the evening’s auction pieces from artists John Giorno, Ragnar Kjartansson and Christina Quarles, but kept mum about his own collection. “I don’t want to name-drop,” explained the mustached director. “I understand now why people [list their art as] ‘private collection.’ When I was young Divine and I used to look through art catalogues and say, ‘Oh they own that? We could steal that,’ it’s a burglar’s shopping list.”

More forthcoming about her collected works was Cynthia Rowley, who greeted each of the honorees with a warm embrace. “Elizabeth [Peyton] is the first real art I ever bought,” the designer said of the portrait of a teenage Queen Elizabeth II by Peyton that hangs in her New York home. “If my house was on fire, I would take that painting and run.”

Brown, Mehretu and Peyton later took the stage amidst a standing ovation to receive their awards, which, given each artist’s preferred medium, fittingly came in the form of a paint-covered brush. “When I got the e-mail saying Julie and Elizabeth would be the co-honorees I called them and the three of us went out to lunch, which is normally something none of us ever do,” revealed Brown, who donned a gem-toned Lanvin gown.

The British-born painter, a self-proclaimed fan of “musicals and karaoke” first hoped the trio would accept their honor via song. “I thought it would be something cute based on the Skyler sisters in ‘Hamilton,’” she explained before “quickly” realizing a speech would be slightly easier to coordinate.

“[This is] a moment when we are all on edge in our country,” continued Brown in her speech. “While it’s an honor to be here for all the reasons we’ve mentioned and many more, we really hope that the choice of honoring us in this specific year where women have been especially visible in challenging power is something that continues.”

Both clad in orange ensembles by Sies Marjan, Mehretu and Peyton echoed their co-honoree’s passionate sentiments. “I hope this kind of openness continues,” said Peyton, who described their seven-minute oration as a “temperature taking of New York.”

The Ethiopian-born Mehretu, who in 2015 was awarded the U.S. Department of State Medal of Arts, added, “[Honoring women] shouldn’t just be an exception, but a beginning.”