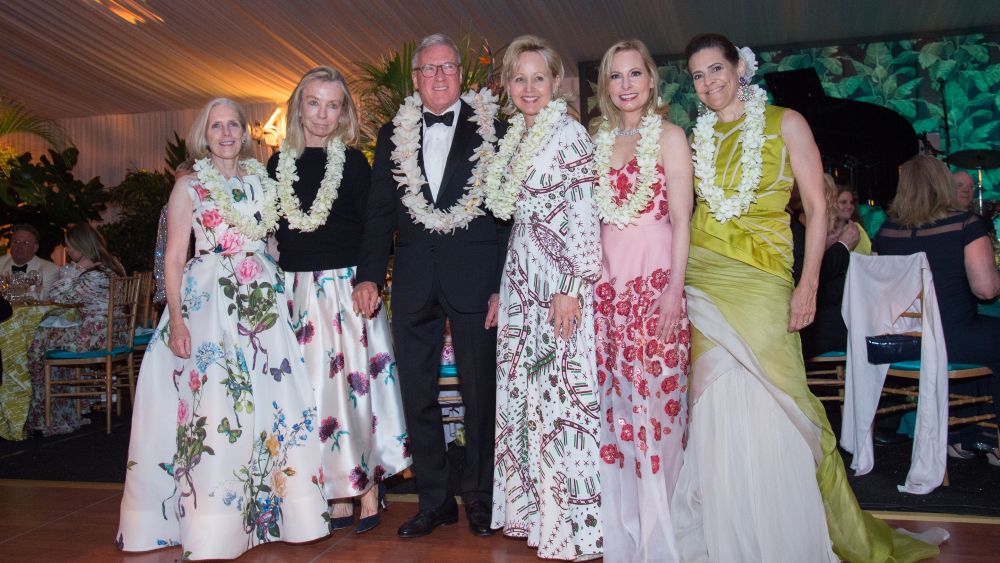 “I don’t know if anybody’s gone to a black-tie luau before,” Gregory Long pondered on Thursday night. “But here we are.”

Yes, the New York Botanical Garden packed in the Hawaiian-themed decor on Thursday night for its annual Conservatory Ball, which celebrated both its “Georgia O’Keeffe: Visions of Hawaii” exhibit as well as Long’s 29-year career with the NYBG. During dinner, Deputy Mayor Alicia Glen officially declared June 7 “Gregory Long Day” in honor of the outgoing garden The William C. Steere Sr. president and chief executive officer.

Welcoming guests into the Enid A. Haupt Conservatory — and dinner tent, which had no shortage of palms and Hawaiian-native flora — were ukulele players and hula dancers, who, like the NYBG, are based in the Bronx.

“Give it a sniff,” said Sigourney Weaver during cocktail hour, motioning to the fragrant strands of Pikake around her neck. “It’s from Hawaii. [Manaola Yap] sent it this morning so I could wear it with the dress.” Hawaiian designer Yap had created Weaver’s seafoam gown custom for the event, which featured a print based on ancient Hawaiian symbols.

“When you break a wooden bowl, this is the notch that you put to put the bowl back together,” Weaver added, showing off her evening wares. “They had to bring the dress over from Hawaii, and because I’m working on a movie where we’re all wearing capture suits in L.A., I asked the seamstress to come down and do a few adjustments. And they were so delighted…they were like, oh my goodness, we get to work on a dress.”

Weaver, in town just for the event (she’s filming “Avatar 2” and “Avatar 3,” hence the CGI capture suits), went on to rave about the O’Keeffe exhibit, for which she also voiced a short accompanying video. “It’s just a great New York institution, and a great resource for all New Yorkers and people from out of town,” she said of her longtime support. “There are so many gardens within this garden. I think once you come and spend a day here, you come for the rest of your life.”

That was certainly the case for Maureen Chilton, who donned a floral necklace from event sponsor Graff.

“The way I came here was my children,” she said. “We used to come here to the Children’s Adventure Garden, that’s what brought me here,” she added. “It’s easy to get hooked in.” That was over 20 years ago; Chilton has been chairman of the board for nine years.

“I think that my enthusiasm for the garden grows more and more each day,” she said.

In partnership with Northern Trust, the 2018 Conservatory Ball raised more than $2.4 million to benefit the NYBG’s children’s education, plant research and conservation programs.