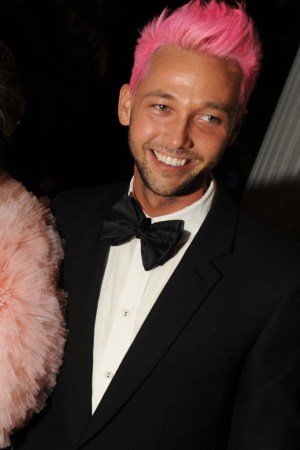 The social set made its annual group outing to the Bronx on Friday night for the New York Botanical Garden’s Winter Wonderland Ball. Among those making the trek for the fund-raiser were Charlotte Ronson, Tinsley Mortimer, Lisa Airan, Alina Cho and Lydia Fenet, as well as chairwomen Nathalie Kaplan, Nina Garcia, Jennifer Creel, Alexandra Lebenthal and Cristina Greeven Cuomo.

Before the crowd moved to a large tent — decked with piles of fake snow and a mock fireplace for the occasion — for dinner, Stacey Bendet took stock of her cocktail-hour surroundings in the Enid A. Haupt Conservatory, which houses the garden’s annual train show. Model trains clicked by on their tracks past the miniature New York landmarks crafted entirely from plant life.

“It’s one of the most beautiful, picturesque places in New York,” the designer explained. “It’s sort of like the perfect winter wonderland, which is why I decided to dress as Cinderella.”

“No one’s really understanding, but I have the butterflies,” she laughed, pointing to her up-do, which, sure enough, included a few butterflies. “I like to dress in theme.”

A bit earlier in the evening, Chris Benz was enjoying the air in the conservatory.

“I just love coming here because I feel like I can breathe, like you’re in nature,” he said. Asked if there were any landmarks he’d like to see added to the show, Benz paused.

“I want to see a full Bronx Zoo in twigs,” he quipped, though the actual zoo was essentially across the street.