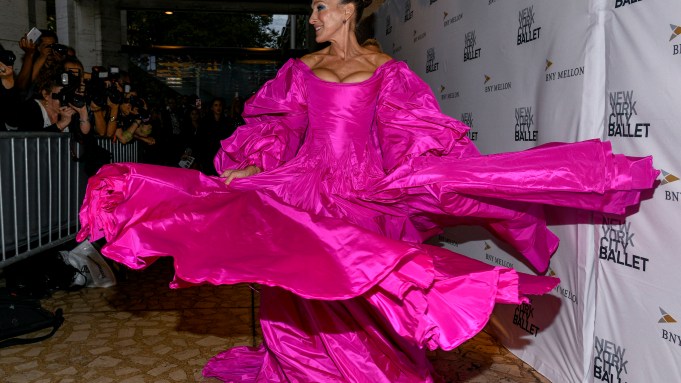 “I decided this year I’m actually going to stay seated and eat and see my friends,” said Sarah Jessica Parker, swathed in a voluminous hot-pink Zac Posen gown and seated at a long dinner table set up on the second floor mezzanine of the David H. Koch Theater at Lincoln Center. Nonetheless, a stream of well-wishers stopped by en route to their own dinner seats after the New York City Ballet’s fall fashion gala performance, which featured the world premieres of Lauren Lovette’s “The Shaded Line,” with costumes by Zac Posen, and Edwaard Liang’s “Lineage,” with costumes by Anna Sui.

Parker, who is vice chair of the NYCB board and gala chair, came up with the idea for the fashion gala eight years ago, which has raised a total of over $20 million for the company.

“I’m always so impressed and I’m so always so excited by how moving and informative and meaningful the collaboration is for both the choreographer and the designer,” Parker said. “I haven’t met one designer who hasn’t been completely undone in the best possible way by this experience. I think fashion designers who are on this unthinkably impossible calendar, this is a sort of respite from that. This is a creative endeavor that so many of them long for,” she added. “It’s a sort of alternate universe of just simply being creative and storytelling and partnering with equally inspired people.”

A few seats down, Andy Cohen huddled with Amy Sedaris before the actress took her seat next to Parker. Nearby, Prabal Gurung offered a hearty “Mademoiselle!” upon catching sight of Laverne Cox (dressed by Posen) as Jordan Roth congratulated Posen on his costuming. Soon after, Liang’s table greeted the choreographer post-performance with an encore round of applause. “I photobombed all of them,” declared Georgina Pazcoguin, the lead dancer of Lovette’s piece, as she weaved her way through the packed tables and stopped to chat with a beaming Andrew Garfield.

“Everyone was incredible, but I was touched by Anna’s costumes because I find she just gets it: the colors, the history, the romanticism,” said gala chair, dancer, costume designer, and choreographer Stephen Galloway as waiters began swapping out the appetizer course. “I just think it’s always an interesting idea when designers work with dancers, because it adds another level to each aspect of the art — to the dance, and also to the fashion.”