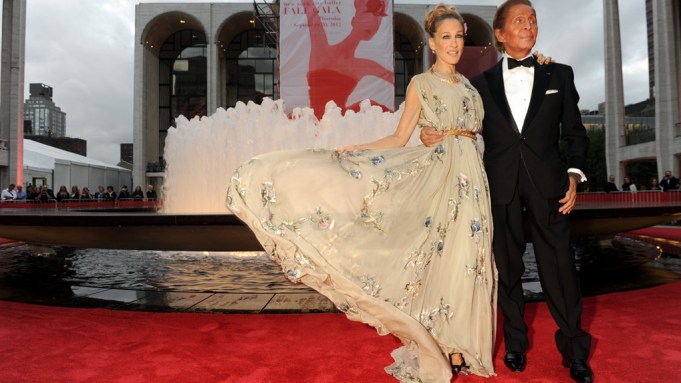 Gussied up guests trickled into Lincoln Center Thursday evening for The New York City Ballet Fall Gala, where Valentino was the man of the hour. The designer played costumer for the occasion, outfitting dancers for much of the two-hour program (with the exception of “Rubies,” a nod to the couturier’s signature shade, which Barbara Karinska costumed). Patrons took in three revivals, one New York premiere and one world premiere.

“I am a ballet fan but more importantly, I’m a Valentino fan,” Iman said as she entered the David Koch Theater. While attendees paid homage to Valentino by donning red, Elettra Wiedemann chose the cosmetic route, prettifying her pout in the hue.

“You have to be careful designing for dancers,” Valentino himself said of the pirouetting, twirling and leaping that would shortly commence. “You must know all the choreography they’ll be doing.

“They have to be able to raise their arms and kick their legs this high,” the designer explained, motioning above his head.

“The pieces are so dense and detailed and complex,” Sarah Jessica Parker, a New York City Ballet board member, said of the designer’s 16-look lineup, before aping his distinct Italian accent to note, “They’re couture, I could put them on the runway right now’.”

Impressions aside, the actress was sure to give him his due. “He has built every single thing himself,” Parker said. “He has been flying here since the latter part of the spring, sitting in that atelier across the street with those seamstresses and literally laying it all out himself.”

Some guests spared a little admiration for the ballet itself.

“It’s aesthetically so fluid but takes such self-discipline and detail, I could never do it,” a very pregnant Delfina Blaquier said. “My 7-year-old daughter asked me to try a ballet lesson with her recently and I did very poorly. She schooled me.”