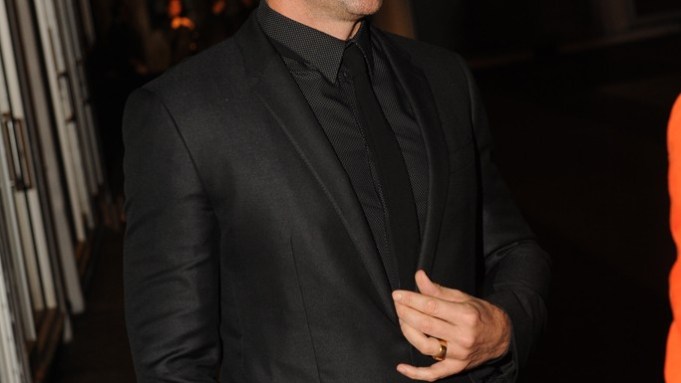 Hudson River Park frequenters gathered at Pier 57 on Thursday night for a fund-raiser drumming up support for the public space. Proceeds from the affair, hosted by Friends of Hudson River Park Gala board chairs Diana Taylor and Scott Lawin and honorary cochairs Julianne Moore and Bart Freundlich, support efforts to rebuild after Hurricane Sandy. The riverside space sustained $30 million in damages because of the storm.

“This is so important to us because this is where we live. This is our city, and I think we live in the greatest city on earth and we all need to contribute to keep it beautiful,” Deborra-Lee Furness said, her hubby Hugh Jackman on her arm, shortly after the couple arrived. Mayor Michael R. Bloomberg snuck out moments later.

More than 900 patrons piled into the airy pier. Swirls of tea lights dotted the periphery. At the room’s center, a towering scaffold stood tall, prettified with potted azaleas and glowing candles in glass hurricane vessels of varying height. During cocktails, many ducked out to the outside terrace to take an iPhone shot of the Hudson River and the Hoboken skyline. Inside, trays of family-friendly canapés (mac ’n’ cheese croquettes, etc.) were proffered to partygoers, Jennifer Fisher, Martha Stewart, Brooke Shields, Sean Avery and Sandra Bernhard among them.

“There’s not government funding at all. No public money is ever spent on the park, even though the public enjoys it,” said Jackman, acting as the evening’s master of ceremonies. “This is why New York is so great. New Yorkers always want our city to get better and better.”

Guests sifted into the dining area, outfitted with outdoor-activity-friendly props floating overhead: a ceramic bicycle, a beach umbrella and, at the front, a sprawling lit-up willow tree. “How about this tree, huh? I used to see trees like this in the old days,” Denis Leary ribbed from the podium as chuckling attendees grazed their roasted beet salads. “We need to give a big, gigantic, thunderous round of applause to our host, Hugh Jackman. He’s the Wolverine! Come in, give it up for the Wolverine. He can sing. He can dance. I hate him.”