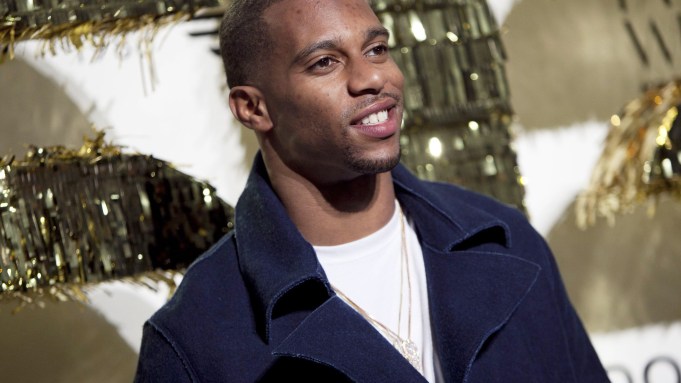 Dockers went with the crowd-pleasing theme of #tbt for its 30th-anniversary bash held Monday night. Nostalgic Eighties candies (remember Charleston Chews?) and snacks were served to guests at the party, which also served as the start to the second incarnation of New York Fashion Week: Men’s.

“Thirty years, that’s hard to believe,” said Lisa Collier, Dockers brand president. “We want to take a moment and celebrate what the brand has stood for and its path forward.”

Dockers is also a sponsor of the men’s shows, hosting a showcase for emerging designers. “We love supporting newbies,” Collier said. “The fashion industry needs to evolve and it’s important to be involved and engaged.”

The party also drew a number of ambassadors who will be sitting front-row at the shows this week, including New York Jets’ Eric Decker, New York Mets’ Matt Harvey and New York Giants’ Victor Cruz in addition to model Tyson Beckford, influencer Dr. Mike Varshavski and a slew of men’s designers.

Harvey said he prefers to overdress rather than underdress, but opted to go with the theme, donning a pair of gray Dockers and a black leather jacket.

The Mets star hurler admitted he was a fashion show novice and hadn’t attended any shows yet, but picked a few that fit into his off-season schedule. “It should be fun, but I can’t let it interfere with my work,” he said.

Harvey said pitchers and catchers report to spring training on Feb. 18, but he expects to head down a few days early.

“I can’t believe it’s February already,” he said. “But we’re all ready and excited to get started.” He said the team, which came up short last season, expects to get the World Series ring this October.

“We’ve got a lot of confidence and we’re on a mission,” he said.