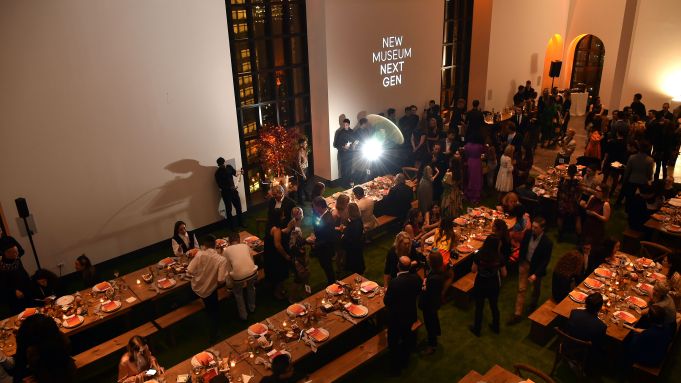 In keeping with the “picnic chic” theme of the evening, guests — including LeeLee Sobieski, Huma Abedin and Mia Moretti — donned a colorful array of clothing as they shuffled across the faux-grass carpeting spread across the private home’s expansive great room.

Phillips, whose speech to the crowd was fittingly interrupted several times by the outdoorsy cricket chirp ringtone of a guest’s cell phone, explained the New Museum “offers artists their first platform for exposure.” The native New Yorker added, “It’s a launch pad for new talent and it’s always about the next generation.”

“I feel nervous,” confessed Tsang, who was recognized with the NextGen award for her contributions to contemporary art, performance and filmmaking. “As an artist I work really hard, but usually the victories happen not in the spotlight. It feels more like a birthday or something where everyone is looking at me.”

Tsang felt “fab” dressed head-to-toe in Fendi (one of the event’s sponsors) and noted her appreciation for participating in the Lower East Side institution’s 2011 triennial early in her career. “The first show I ever did was at the New Museum. I was really young and unknown and they gave me this huge opportunity. I feel like I’m one of the children of the New Museum,” remarked the now 35-year-old.

Black Thought of The Roots, who also cohosted the event, sat casually upon one of the reclaimed wood tables lining the room. “Fashion, the culinary arts, creative writing, visual arts and music all go hand-in-hand,” said the musician, whose birth name is Tariq Trotter. The Philadelphia native launched a sneaker collaboration with Clear Weather in June inspired by the 10th anniversary of his hip-hop group’s “Roots Picnic Festival.” Noting the thematic connection to his event and the NextGen dinner, Trotter added, “I wish I had just one pair of my shoes. They come in a basket and everything — definitely ‘picnic chic.’”

Alice + Olivia founder Stacey Bendet, who was joined at her table by artist Angelica Hicks and actress Lola Schnabel, proudly displayed a piece from her most recent fashion collaboration: a boldly colored “Love Me Do” skirt inspired by a limited-edition capsule collection with The Beatles, which will be available next week.

“I love the freedom of picnics, but it always sounds much better than it is” revealed Bendet who with has two children with husband Eric Eisner. “I take my kids to Battery Park and then [when you’re outside] s—t is flying away and you can’t cut anything, but this is a great event. I’m always very supportive of young artists.”

Alice + Olivia Collaborates With The Beatles

Resisting With Sweatshirts: Lingua Franca Comes to the Whitney Museum

Alex Wolff on Growing Up in Show Business