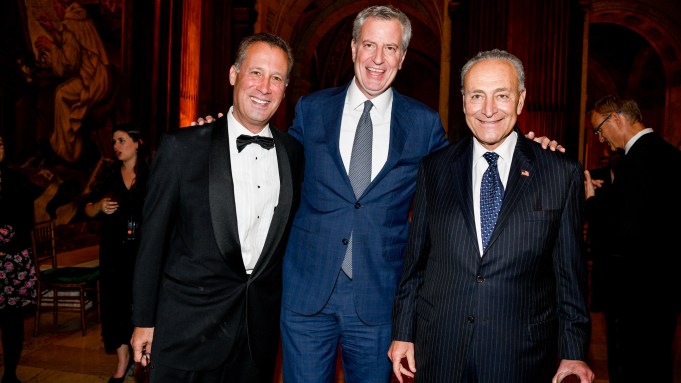 As the 2020 elections approach, it’s in politicians’ best interests to weave their way into New York society events. And although New York Mayor Bill de Blasio has officially pulled his name from the presidential running, he still showed up to support the New York Public Library’s Library Lions gala and awards ceremony on Monday night.

“I’m a true believer in the New York Public Library,” de Blasio said. “Everyone, anyone comes here on the same terms: to learn, to grow. It’s one of the exemplars of a free and democratic society. It needs support.”

Speaking of support, who will he vote for president when the time comes?

“I’ve got time to sort that out,” he said. “But I can say from personal experience, there are a lot of good candidates.”

The honorees of the night, Elizabeth Alexander, Philip Glass, Jamaica Kincaid, Jill Lepore and Frederick Wiseman, greeted each other warmly — save Glass, who was ill.

Lepore said she has both a personal and a career-oriented history with the library.

“I would say not six months passes where I don’t have occasion to come down and work with the manuscripts collection,” Lepore said. “This summer, I wrote a story for the New Yorker about Herman Melville and his sister Augusta. Melville burned most of his papers, but Augusta kept the family papers in these two trunks. They were found in a barn in New York decades after his death, when everybody thought no Melville-lia had been saved. The NYPL bought them and brought the trunks here.”

Kincaid, meanwhile, recalled the story of when she first found out she’d been named a 2019 Library Lion. She thought it was a prank.

“It was very unexpected,” Kincaid said. “I was just sitting at home when somebody called and told me. I always think these things are someone playing a joke on me. I thought, ‘Are you sure you have the right number?’”

De Blasio spoke to the crowd during dinner. He connected the library’s importance as a cultural institution to the current state of affairs in the White House, indirectly referencing President Trump in his speech.

“It’s not an overstatement to say our democracy is in a state of strain,” he said. “Even in a tough time, keep the faith.”

Afterward, Lauren Santo Domingo, Joyce Carol Oates, Peter Marino, Gay Talese and other attendees walked downstairs for dessert and a book signing. Charlie Rose also showed up to the Lions — a rare public appearance after he was accused of sexual misconduct by more than 27 women in 2018.