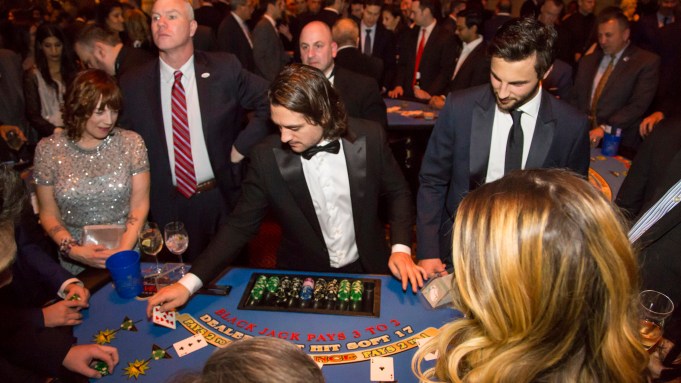 The New York Rangers traded their blue shirts for black tie Tuesday night as the players turned out in force at the team’s annual Casino Night. Presented by Empire City Casino, the event at Gotham Hall served as a fund-raiser for the Garden of Dreams Foundation, a nonprofit organization that raises funds for children facing obstacles.

The evening started off with a video of a young girl whose liver disease caused her to have a transplant at 18 months and who was signed to a one-day “free agent” contract by the team, making her the first female to ever be a Ranger. The girl, Kayleigh Petersen, was featured on the ice before the game and introduced with the starters that night.

Henrik Lundqvist, the Rangers star goalie and spokesman for the Garden of Dreams, welcomed the well-heeled attendees who paid up to $2,000 a ticket for the chance to rub elbows with Lundqvist and his teammates. Rangers captain, Ryan McDonagh, who was dressed by John Varvatos for the evening, was dealing blackjack, while other players mingled and chatted with the fans.

Lundqvist, arguably hockey’s best-dressed player, donned a patterned midnight blue tuxedo by Swedish designer Stephen F. “He has his own store in the Meatpacking District, across from the Standard Hotel,” Lundqvist said. “I love his suits and coats.”

He said the European sizing of F’s collection usually fits him well and doesn’t require much tailoring. “We just do a few tweaks,” he said.

Lundqvist said he enjoys the opportunity to see his teammates dress in formalwear, although “I see them in suits four or five days a week,” he said. “But this is for a great cause and the guys enjoy it.”

He said in the 11 years he’s been attending the event, he’s seen his teammates’ sense of style improve. “The contrast was bigger before,” he said. “Now I feel like it’s a different time and they care about their style.”

They also care about the standings. The Rangers are currently in second place in their division and Lundqvist is confident that the team can prevail. “I believe we can go all the way,” he said. “We have the team to do it. I know a lot of other teams feel the same way, but we’re hungry.”

The Rangers’ chances were improved this week by the addition of Eric Staal, who joined the team on Monday — a day before the event. But that didn’t stop Staal from attending. In fact, he turned to Ralph Lauren for a little wardrobe advice, wearing a trim midnight blue formal suit and long black tie for the festivities.

Varvatos also dressed Chris Kreider, Kevin Hayes and Derick Brassard, who said he was voted the worst dressed last year and was determined to change his fate this year. He wore a textured indigo blue tux this time around, and was clearly more on-trend.

The evening also featured a silent auction of Rangers memorabilia including signed sticks and sweaters as well as special experiences such as private lessons. The event raised over $325,000 for the Garden of Dreams.