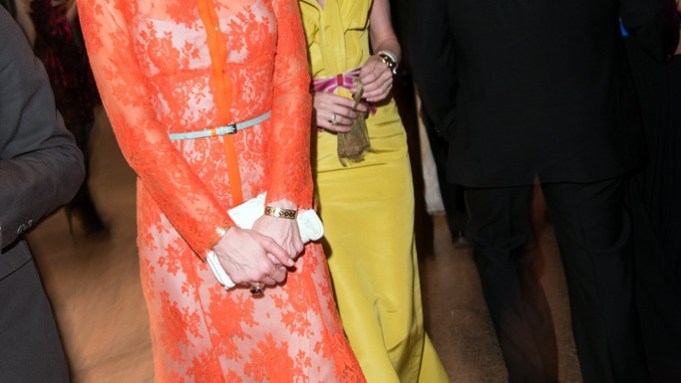 “This is one event where almost everyone wears Carolina Herrera,” said Lauren Santo Domingo, cutting a slender figure in a canary yellow trumpet gown as she filed into the Metropolitan Museum of Art’s Temple of Dendur on Thursday night.

Maybe that was an overestimation considering the hundreds of partygoers in attendance at the ninth annual Apollo Circle Benefit, but Carolina Herrera, who sponsored the event for the sixth consecutive year, stuck to tradition by dressing more than 40 guests, including Hannah Bronfman, Lauren Remington Platt, Jessica Stam and Hilary Rhoda. Themed “Siren’s Spell,” the party benefited the Metropolitan’s Fund for Art Conversation. Guests mingled throughout the Sackler Wing while a silent slow-motion video of starfish and octopi screened on the wall, which viewers found both perplexing and mesmerizing. Models posed for group photos near an elevated bar but voiced troubles with Instagram due to weak cell phone service.

“I think everybody should go to museums, and from a very young age,” said Herrera. “I used to bring my daughters when they were very little. I think it’s important because it trains your eye and it gives you something beautiful to look at.”

J. Alexander, aka Miss J, dapper in a shimmering gold Marc Jacobs tuxedo, performed an exaggerated runway walk — which he famously taught young hopefuls as a judge on “America’s Next Top Model” — through the museum’s Vélez Blanco Patio.

“Saturday Night Live” head writer Seth Meyers, who revealed plans to spend Thanksgiving in Amsterdam as part of a long-standing family tradition, reflected on his “Weekend Update” jab about the ubiquitous David Petraeus scandal. “It was a real kill shot of a joke,” he said. “Now that we have to write actual sketches about it, it’s a lot harder.”