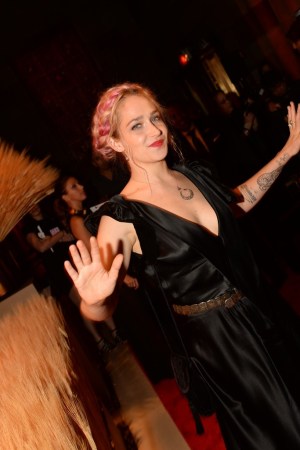 “I fought for this frock, honey,” Selita Ebanks sassed while petting her fringed Chloé look, an uncharacteristic choice for the model, who typically lands on the va-va-voom side of the spectrum. Ebanks had just taken her seat at the 15th annual New Yorkers for Children fall gala, dubbed “Let ’Em Shine” and held at Cipriani 42nd Street in Manhattan on Tuesday night. A longtime supporter of the charity, Ebanks had a brief foster-care stint in her childhood and said she owes it all to her mother for eventually being able to pull her out.

“My mom is in her 50s now,” Ebanks said. “And I bought her this beautiful house in Georgia, right on a lake. But she woke up one day and she said, ‘I’m bored here. I’m not dead yet.’ So she packed up the whole house and left. Now she lives in Leeds, England. [She’s] fearless.”

The event drew other society-scene regulars: Elettra Wiedemann, Jen Brill, Jennifer Creel, Julie Macklowe, Alexandra Lind Rose, Adam Lippes and not-so-regular Greg Kelly, who emceed the affair, sponsored by Chloé and David Yurman. The cohost of “Good Day New York” can be seen in gigantic ads plastered onto the sides of New York City buses in promotion of his morning show. “It’s fun [to see yourself] for about six hours or so, and then the grotesque little insults are drawn [on your image],” he said.

Rachel Roy, who did not show during New York Fashion Week this go-around, said she has been coming to the dinner, which marks the beginning of the fall gala season, for 10 years. “You sometimes take for granted that you have parents you can call. Still, to this day, I ask [my parents] about things that I have questions about in my everyday life,” she said. “My mom is really good with numbers, and I’m not. She’s always there for me with things that I don’t know how to do.”

After the awards were doled out and dinner inhaled, Estelle performed her new single, “Conquerer,” and managed to get the entire room out of their seats for an impromptu singalong. However, Jemima Kirke had her mind elsewhere. “You might be the wrong person to ask,” she said to a fellow guest, her pastel-pink hair tied up in milkmaid braids. “But do you know where I can find a cigarette?”