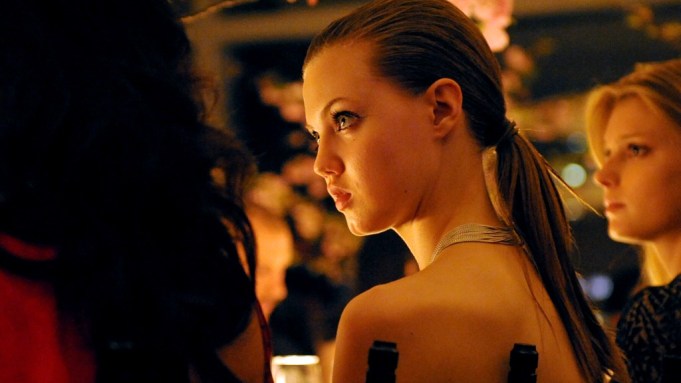 “That’s that Victoria’s Secret model,” said one photographer, stationed outside Manhattan’s Mandarin Oriental on Tuesday night, clueing in a fellow paparazzi between takes. Lindsay Ellingson, in a shadowy Valentino column, preened for the flashbulbs as a host of her fellow do-gooders — Alison Aston, Tinsley Mortimer, Eddie Borgo, Rebecca Minkoff and Zani Gugelmann — made their way into the hotel for New Yorkers for Children’s 10th annual Fool’s Fete. Billowing clouds of tulle, poufs of organza and crepe columns spilled out of the black Town Cars queued up outside the hotel as guests began turning up to the Valentino-sponsored soiree.

In the packed foyer upstairs, Emmy Rossum spoke emphatically to Julie Macklowe, while Olivia Palermo cozied up to Hilary Rhoda. In a neighboring circle, Adelina Wong Ettelson, midconversation with Olivia Chantecaille, protested when a passerby snagged a heel on her Valentino couture train. “Ah!” she yipped, like a puppy whose tail had been inadvertently stepped on. Lindsey Wixson and Sigrid Agren hovered near their table. The two got flummoxed when asked if they’ve done anything foolish lately. “I don’t think I intentionally make a fool of myself too often,” Wixson demurred. “I don’t regret anything though, I’m one of those people that thinks it all happens for a reason.”

The nonprofit, which supports youth in foster care, opened the program with remarks by two of its “guardian scholars,” cohosts Shavonn Wheeler and Amara Toure. They were followed by a touching speech from fellow guardian scholar Vanessa Louis. Lydia Fenet then took to the podium, prodding attendees to dig into their pocketbooks. “That’s how you get a hot wife,” Fenet cracked, applauding one male bidder who had just contributed $5,000. “This guy looks like James Bond! And his wife, look at those legs!”

Peter Brant table-hopped to catch up with Fabiola Beracasa, while tablemates Erin Heatherton and Harley Viera-Newton posed for a selfie on the DJ’s iPhone. Viera-Newton opted to stick her tongue out for the shot while Heatherton did a pre-photo hair flip.

The tunes began blaring over the speakers, cueing partygoers to start shimmying on the dance floor. Sofia Sanchez Barrenechea spun Laure Heriard Dubreuil while Harry Brant mouthed the words to “Like a Prayer.” Heatherton bopped in her seat while puffing away on an electronic cigarette. Afterward, many retreated outside to take in the balmy weather and have a post-meal, nonelectronic cigarette. “Fancy seeing you here,” Peter Brant said to Crystal Renn, feigning perplexity.