Season two of E!’s reality show “House of DVF” was well under way, and everyone at the event had been unwittingly cast as extras. 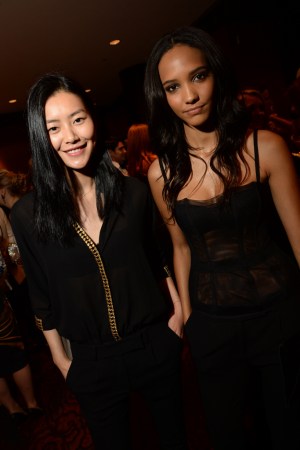 The New Yorkers for Children’s annual spring dinner on Thursday was held in honor of Oscar de la Renta, a longtime champion of the organization. But it was Diane Von Furstenberg — or at least, her brand — that created the most buzz around the Mandarin Oriental’s grand ballroom as four women decked out in their finest formal wrap dresses swanned around the room, trailed by a crew of cameras, boom mic operators and PAs with waivers to be signed. Season two of E!’s reality show “House of DVF” was well under way, and everyone at the Saks Fifth Avenue-sponsored event — Peter Copping, Arizona Muse, Sophie Theallet, Christine Schwarzman, Julie Macklowe, Bibhu Mohapatra and Hailey Clauson — had been unwittingly cast as extras. “Season two is going really well — the girls are very cute,” said Jessica Joffe, unofficial den mother to the contestants vying for a chance to be a “global ambassador” of DVF. “We’re down to four, and tonight we’re watching them to see how they are in a social setting like this, because this will be a big part of their eventual job.”

By the time the dinner bell rang and the contestants had retreated to their seats in the rear of the ballroom, cameras in tow, the focus had returned to de la Renta, and his history with the organization. Nearby stood Alina Baikova, the newly minted face of de la Renta’s latest fragrance, “Flor.” The Ukrainian model lingered, looking statuesque in a slip dress — ODLR, of course — and perhaps a bit overwhelmed. “I don’t really know what it means,” she said when asked how it felt to be the new face of the brand. “It’s a pleasure for me, but I don’t think it means something.”

This story first appeared in the April 20, 2015 issue of WWD. Subscribe Today.

The gig had at least scored her an invite for the evening, which raised more than $725,000, and some form of lingering familiarity among the crowd, as each guest took home their own bottle of “Flor.”