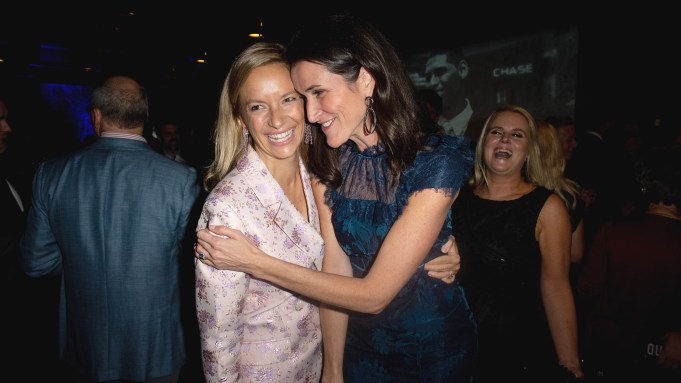 For its annual Fall Fete, New Yorkers for Children did something rather out of the ordinary for the gala-going crowd: it headed downtown.

For the first time, the organization — which works in tandem with the New York City Administration for Children’s Services to provide additional private funding to the city’s children and teens in the foster care system — moved the event on Thursday from Cipriani 42nd Street to the Highline Stages in the Chelsea neighborhood. Christie’s senior vice president and cochair of the gala Lydia Fenet Delaney explained this move kept the evening fresh — and, she noted, “to make it feel like we weren’t doing the same thing over and over again.”

Fenet Delaney led a lively auction at dinnertime, after attendees had spent some time hanging out in the front room drinking cocktails and snacking on the seemingly endless stream of hors d’oeuvres coming from the kitchen.

In her signature fashion, Fenet Delaney ribbed the crowd: “If you bid tonight, I will call you the most attractive person in the room in front of all your friends,” she said. She urged guests to donate money and ultimately helped raise more than $100,000 for the cause. The veteran auctioneer takes at least 70 auctions a year, and said in this age of online crowdfunding, there will always be room for an in-person paddle-raiser. A couple of years ago, though, she noticed a turn in the technological aspect of bidding.

“People were using a lot of the automated bidding for the auctions,” she said. “So during an auction, people would punch their bids into their phones. I often joked with the organizations afterward. I would say to them, ‘I can see from the stage that people are on Tinder.’”

At New Yorkers for Children, though, this wasn’t the case — attendees were rapt during the various performances (a dance sequence by the group Rajé/Rajé Reborn and a karaoke version of “Empire State of Mind” sung and rapped by Amber Iman and King Tolen, respectively,) on stage. Later in the evening, two kids who’d worked directly with New Yorkers for Children gave testimonials of how their lives were impacted by the Back-to-School Package Program and Nick’s Scholars. The former gives laptops, MetroCards and Amazon gift cards for book purchases to teens who have aged out of foster care and want to go to college, while the latter provides financial assistance, tutoring and mentoring to those who are eligible. One of the two speakers, named Alondra, told the crowd about her difficulties growing up. She was diagnosed with extreme depression, anxiety and post-traumatic stress disorder at a young age, she said. Her voice wavered as she spoke about being hospitalized for weeks at a time. But at the end, she stated that members of the organization became her chosen family and aided her through the hardships.

There was barely a dry eye in the house. Once she’d finished her speech, the guests — in their suits and cocktail dresses, some of whom never having been so close to the story of growing up in the system — stood up and clapped.