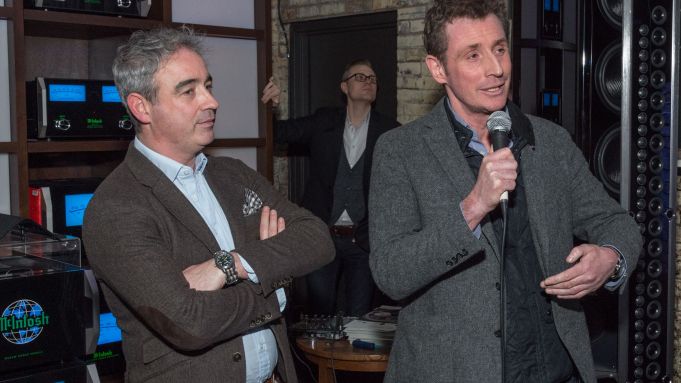 “This isn’t my house,” said Nick English. He was standing on the second floor of The World of McIntosh’s SoHo townhouse, where he and his brother (and fellow Bremont Watch Co. cofounder) Giles hosted a party Thursday night. A celebration of the luxury watch brand’s newest collection, the fete spanned five floors, including one with an indoor pool and another with an outdoor terrace.

Unlike many New York house parties, which are generally limited to a preapproved space, Bremont’s invited guests to wander up and down all five floors. On display were the latest collection and an array of McIntosh speakers, through which blared an assortment of music curated in part by DJ Paul Simonon, bassist for The Clash.

“These are made for serious pilots, and they’re very good for timing Scotch eggs as well,” said food critic Tom Parker Bowles, pointing to his Bremont watch. “I usually never wear watches, but I so like this watch — I mean genuinely. Obviously I’ve been given it, but they’re just really cool. What I love is this brand seems about 100 years old, but these two brothers started it and it’s got this amazing history of aviation and military. I just think they’re cool watches.”

“I am what they might call a horologist,” he continued. “I like [watches] because they require a great deal of skill and craftsmanship to make and we don’t have enough of that anymore.”

Rees, who cofounded Agent Provocateur with former husband Joseph Corré in 1994, launched an intimates label, Les Girls Les Boys, in the fall. With a focus on minimalistic undergarments for men and women, the company caters to the Millennial and Gen Z markets.

“I don’t want to be negative about these brands, but Victoria’s Secret and Agent Provocateur are not relevant to this generation. Trying to obtain that body and that idea is not for now, with everything that’s going on,” she said. “I see kids trying to live up to that and they’re getting unhappy and anxiety and the whole social media thing. So this is kind of in response to that and what I’ve done with this brand, it’s right for now. For the Millennials and the Gen Zers, it’s about boys and girls, it’s the way they share their clothing, how they hang out together, how they interact together as far as their connections and their relationships, friendships. It’s not always so much about sex, it’s about the intimacy as friends or siblings.”