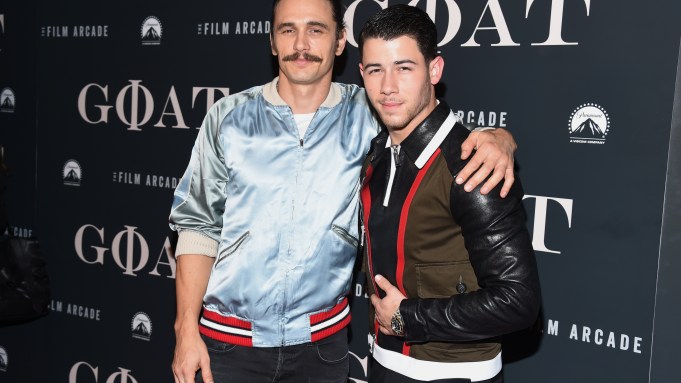 He may be a Jonas brother, but in Sundance darling “Goat,” Nick Jonas experienced a different form of brotherhood.

“The story really spoke to me,” said a Dsquared2-clad Jonas on Monday evening, speaking from the basement of Sunshine Landmark where the film was staging its New York premiere. “At the core, it’s about two brothers and their journey together — and then as an overarching theme, it’s about fraternity culture and the dark side of what happens when you leave a bunch of  twentysomething-year-old guys together with no consequences for their actions.”

The film is based on the 2004 memoir by Brad Land and explores male brutality from multiple angles. Land was physically assaulted before his freshman year of university; he carried the emotional scars from that incident with him while he and his freshman year roommate pledged the fraternity where Land’s older brother, Brett, was already a member. Much of the film is set during the fraternity’s “hell week,” the period during which new pledges are hazed in the name of bonding and brotherhood building. In the movie, the aggressive hazing rituals shown were outlined ahead of time, but largely improvised while filming.

“I saw pretty quickly how easy it would be to go to this level, for things to get out of hand in the way they did in this film, and that’s scary,” Jonas remarked.

He was joined at the premiere by one of his real-life brothers (Kevin), as well as much of the film’s male-heavy cast — a brotherhood of sorts, with James Franco at the helm. Franco helped produce the movie and also makes a cameo onscreen as a frat brother alumni.

“I know how hard it is to transition from one medium into another,” said Franco, who had a hand in casting Jonas in “Goat.” “[Nick] doesn’t need to do this — he’s got an amazing career as a musician,” an attribute which worked in his favor. “I thought, ‘He’s going to be working extra hard, the pressure is going to be on him.'”

The pressure is also on the film, which had been in the making for over a decade. “I think what the movie does is it really takes you on the ride; it takes you on that experience [of pledging],” said Franco, who then pondered the question of where the line between team building and hazing falls. “I guess when people start doing things that are detrimental to their physical health or their mental health, that’s probably a pretty clear line,” he said.

Hazing continues to be an issue on campuses where Greek culture is prevalent and for many, the line isn’t always clear. “I don’t want to say anything stupid,” said model Barbara Palvin, when posed the same question. “Just write something that you think I should say.”