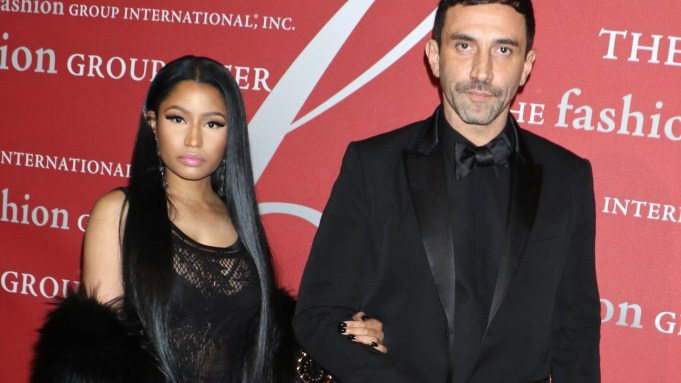 NEW YORK — Like everything else in the fashion universe, the idea of being a nonconformist is open to interpretation.

In a business blanketed with labels, designer ones and otherwise, Thursday night’s Fashion Group International’s Night of Stars celebrated “The Non-Conformists,” giving honorees a different kind of branding. With a firestorm of outside factors — the presidential election, Brexit and buy-now among them — several of this year’s winners admitted they hadn’t paid much mind to their nonconformist status. Superstar award winner Riccardo Tisci took it in stride, as did his date for the night, Nicki Minaj, who said that’s part of the reason why they can relate.

However you define Tisci, he said he is fueled by the freedom of his work, and the fact that he is not only selling bags and shoes. “This is a dream because I come from a very simple family. In a small way, certain designers became the leaders. I’m not saying you can change the world, but you can influence a lot of young generations. Next to selling bags and shoes, you can give a very social message of love and a message of hope.”

She and Tisci “absolutely, absolutely” connect as nonconformists. “He connects to people who didn’t feel they fit in. It’s a great story to see where he’s gotten — a person who was supershy and a Gothic teenager. I think it’s really inspirational that he has taken that and become everything that he is.”

In on the joke that she might not look like a conformist, Tory Burch recalled how she was told that no one would ever shop online while launching e-commerce 13 years ago. Lord & Taylor Fashion Oracle winner Andrew Bolton said, “I’m probably a quiet one. The designers who interest me the most are probably nonconformists, Rei [Kawakubo], obviously [so much so that she’s the focus of the next Costume Institute exhibition]; John [Galliano]; Karl [Lagerfeld]; Miuccia [Prada] — the ones who take risks, really, and make you think differently about things. I think I’m an armchair nonconformist.”

His partner, Thom Browne, suited up guests at their table including Baz Luhrmann and Catherine Martin. The filmmaker said, “Andrew’s just an incredible adventurer to be around. He’s a beautiful person. But he’s also a genre all in his own. I think it’s his fascination with the human condition without getting too existential about it — funny, preposterous, beautiful, moving — it always oscillates a lot.”

Levi’s James Curleigh locked up the night’s most-original-acceptance-speech title by singing a few lines from Bob Dylan’s “The Times They Are a-Changin.” Accepting the Brand Heritage award, Curleigh reminded the crowd that 100 years before ripped jeans were a fashion trend, Levi’s were created to be a purposeful work pant for coal miners. “It’s times like this when you remind yourself that heritage really does matter. And if we don’t make it matter, who will?” he said.

Curleigh may have hinted at a political undercurrent, as did this year’s Media winner Joe Zee, who joined his presenter and former boss Polly Mellen on stage with,”I’m with her.” British actress Ruth Wilson left nothing to wonder, punching a fist overhead with “Go Hillary,” before presenting a Fashion Star award to Erdem Moralioglu. Eleven years into his career, the London-based designer hasn’t only made inroads with the Duchess of Cambridge, but will open his first concept shop with Saks Fifth Avenue in May.

Before Tommy Hilfiger and his wife Dee Ocleppo accepted the Humanitarian award from Hailey Baldwin, the designer said the nonconformist label applies to him at times, but more in a marketing sense than anything else. The Night of Stars moniker was also in question. He said, “But I don’t think of myself as a star. I think of Hollywood stars, or music stars or some of the models are stars.”

Before “Girls” actress Zosia Mamet gave H&M’s Daniel Kulle the Sustainability award, she said, “I think of myself as someone who just does what she likes. I guess if you want to call that nonconformity, sure. But I don’t do it to be a nonconformist.” At work on an Amazon series about Zelda Fitzgerald, Christina Ricci said, “I think of myself as a contrarian, which is probably less fun. The terminology is more irritating and less rock ‘n’ roll.”

Other winners included Pamela Baxter for Beauty, The Real Real’s Julie Wainwright for Innovation in Retail e-commerce and Bunny Williams for Interior Design.

During the cocktails, Fashion Provocateur Pat Cleveland winner offered modeling advice for other girls — Kendall Jenner and Gigi Hadid: “Listen to your mothers. They know what they’re talking about.”

Auteur of Style winner Iris Apfel said of her own ascent in fashion, “It seems to me in these 11 years, I am living in a parallel universe. It’s all been so surreal. How many 95-year-old cover girls do you know?” she said. “I’ve done so many wonderful things because of the generosity and kindness of all you wonderful people here. From doing a documentary to knocking out Tom Brady the other night with my boxing gloves [at a Tag Heuer event.] You should have seen me getting out of the ring. That was something. I can’t walk,” Apfel said.

Marina Abramović had a different view of the well-dressed crowd looking happy with drinks in hand. “There is so much solitude, so much loneliness, so much pain right in this room. Look at the life we live. We’re completely disconnected from nature. We are using our technology. We do not have peace of mind. We are not ourselves any more,” she said. “We wake up in the morning and it’s stress, stress, stress. We’re living in a country that’s living on the brink of who knows what’s going to happen. It’s a very difficult moment.”