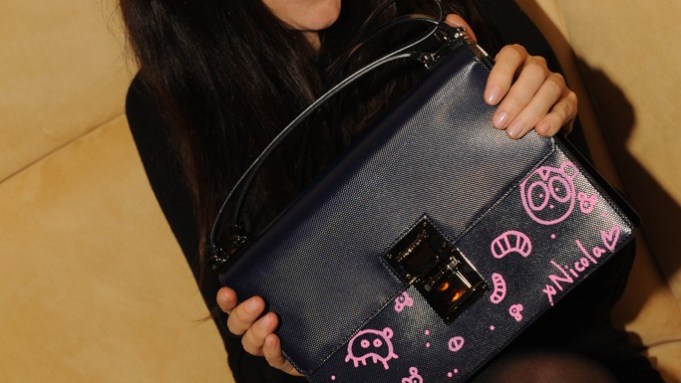 Nicola Formichetti has done a 180 of sorts. “I was always very anti-bags. I was never into them. I was always like, ‘Why do girls spend so much money on a bloody bag?’” he said in his indeterminate, vaguely Parisian intonation. “But my girlfriend and my Twitter followers started to demand it. People would tweet me, ‘You have to do a bag,’ so I started to, and now I’m completely obsessed. Bags are all I think about.”

One bag in particular, a limited-edition (very limited, as in 20 total) structured graffiti-print cross-body, was the raison de fêter on Tuesday evening at the Standard’s Boom Boom Room, where a Shopbop.com- and Mugler-cohosted romp was underway. “We wanted it to be, like, bento box-shaped but with a little bit of sci-fi influences too,” said Formichetti, whose leg bounced incessantly as he spoke. It’s clear the designer had a verve for the item, which will be sold exclusively on Shopbop to the tune of $1,945.

The recent media attention of the possible effect of this year’s historic flu outbreak on fashion week seemed to have instilled the fear of God in the collective.

“I’m so scared of getting sick,” Stein said, eyes widening.

“I need to stock up my refrigerator with coconut water,” Solomon said reflexively.

“Well, no. But I’m doing it tomorrow morning,” she conceded.

Meanwhile, Julia Restoin Roitfeld, nestled snugly in a corner banquette, advanced another of-the-moment preoccupation. “I just did a five-day cleanse last week, the Organic Avenue one, just to get all the bad stuff out,” she offered. “It worked! I feel so full of energy now. I’m ready to attack the week.”

And so she did with a Marni fragrance fete next on the agenda. A newly blonde Leigh Lezark directed her. “I think it’s at the one on 13th and Ninth,” the DJ advised.