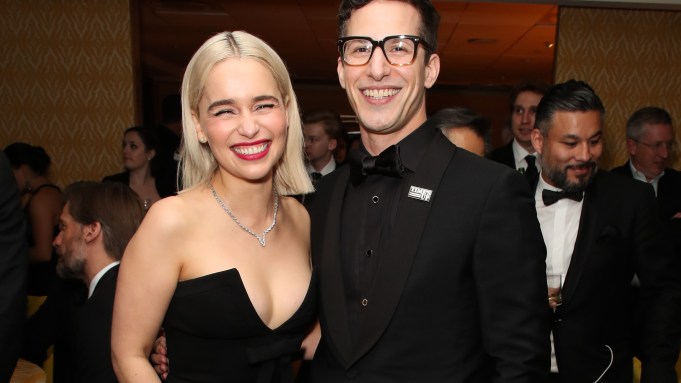 “Wahoo!” Nicole Kidman squealed, as she pumped her hardware into the air. Having entered HBO’s Golden Globes after party through a private entrance, the “Big Little Lies” star and husband Keith Urban initially went unnoticed as they entered at The Beverly Hilton Hotel’s Circa 55 Restaurant on Sunday night. In fact, when she proudly held up her Golden Globe waiting for flashbulbs to pop, it took a moment for photographers to notice.

But soon all eyes were on Kidman and her cast. (The group took home Best Miniseries or Television Film in addition to individual nods for Kidman, Laura Dern and Alexander Skarsgard.) “I’m overwhelmed,” said Skarsgard in Swedish with a plateful of food in hand.

Elsewhere, Kit Harington and the “Game of Thrones” cast hung out. But first came the carpet. “If I do one, I have to do them all,” Gwendoline Christie said, declining to speak with a reporter. But Emilia Clarke happily worked her way down the line and reflected on the ceremony.

“The energy was so incredible, and electric and exciting and wonderful,” she said. “It was different because, let’s face it, the environment, when you go to these award shows, everyone is nervous. You’re literally getting judged. That’s all that happens on the red carpet and when you get in the room.”

Clarke said the black dress code allowed everyone to relax for once. “Suddenly you’re there and you’re like, ‘I’m not being judged, at all.’ We are looking out instead of looking in and we’re celebrating and we’re embracing and we’re all together in this.” She said her evening highlight was Oprah Winfrey’s speech as she accepted the Cecil B. DeMille Award Lifetime Achievement Award. “I had an O-ment,” she laughed. “I think we all had an O-ment.”

“The Deuce” star Maggie Gyllenhaal said her highlight was “meeting Isabelle Huppert in the bathroom and having a sort of moment of mutual appreciation which I never could have dreamed up. I’m a really big fan of hers. Also, I had a really great moment with Shirley MacLaine who likes ‘The Deuce.’” Gyllenhaal said she felt particularly thankful for this year’s nomination. “Even though I’ve been [to the Globes] before, I don’t take things for granted nearly as much as I did when I was younger.”

And even on the after-party circuit, Time’s Up remained a hot topic. Without being prompted, Gyllenhaal made sure to share: “One of the amazing things about Time’s Up is that all of us got in a room together. Often we’re up against each other and there’s an air of competition that gets created in this industry and probably in many industries. It was amazing to feel that fall away.”

With business out of the way, everyone let loose inside. Clarke caught up with costar Harington followed by Andy Samberg. Mariah Carey kept close to boyfriend Brian Tanaka. Meanwhile, Ashley Judd, Michelle Williams, Busy Philipps, Salma Hayek and Garcelle Beauvais huddled in a group near the dessert table. “Can we take a picture?” Philipps asked, and many of them did. Soon after, Philipps helped Williams remove her shoes. The actress remained barefoot as she stood deep in conversation with Hayek.

Others on hand included Jude Law, Sharon Stone and Geena Davis. Meanwhile, The Hilton Family — including Paris’ new fiancé Chris Zylka — hit the dance floor for Michael Jackson’s “The Way You Make Me Feel” and Prince’s “1999.”

Newcomer Alin Sumarwata soaked up the surreal scene. “Oh my god,” sighed the Australian “Strike Back” star. “This is crazy fun. I ran into Reese Witherspoon. I just stared and smiled and she smiled back. It’s probably good that we didn’t meet because I would have said something stupid. But I had a moment. And wow, there’s Ashley Judd. This is not normal.”

More from the Golden Globes after parties:

See photos from the HBO Golden Globes after party, here.

For photos from the FOX Golden Globes after party, head here.

See photos from the Netflix Golden Globes after party, here.

For photos from the Amazon Golden Globes after party, head here.