The actresses ended the night on a dramatic note, with a kiss. 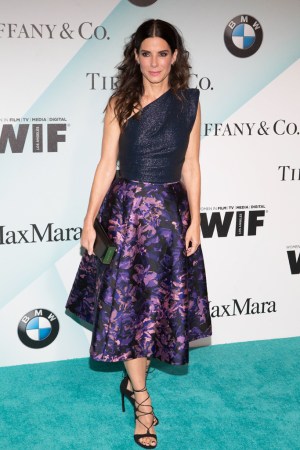 “There is so much power in this room right now,” Sandra Bullock said, surveying an audience that included Nicole Kidman, Naomi Watts and Ava DuVernay. The group was on hand for Women in Film’s Crystal + Lucy Awards held Tuesday night at Los Angeles’ Hyatt Regency Century Plaza Hotel. “We are all going to be on the same menstrual cycle after tonight,” Bullock deadpanned, before getting serious about gender inequality in the film industry. “Know that as women, if we do not reach out a hand to help, our fellow ladies have a steep climb up the corporate ladder [and they] will never know the true joys of success.”

Earlier, on the red carpet with husband Keith Urban, Kidman discussed what it meant to have her longtime friend Watts present her with The Crystal Award for Excellence in Film. “It’s like my sister is giving me this award. We’ve known each other since we were teenagers,” she said. “We’re doing this tonight, but we’re also having a birthday party for me in a couple of nights. We do the work stuff and then we do the play stuff.”

Closing out the night, Kidman hit the stage, where she recalled that she was once too insecure to do a student film because it would have required her to wear a shower cap and kiss another girl. “Today I know that…I’m ready to don this cap and kiss any woman in the room,” she joked, before throwing on the unexpected accessory. With that, Watts promptly joined her and the two dramatically kissed — giving new meaning to the term nightcap.