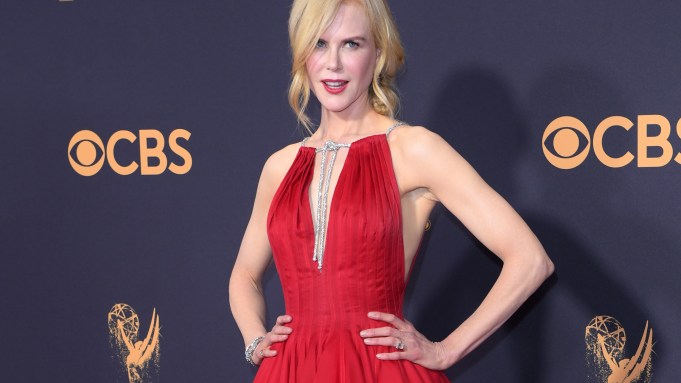 “I’m a sucker for awards shows. Obviously there’s some stress of getting in the car, is the dress going to wrinkle, blah blah blah, but I make sure to do the photos before so now I’m totally relaxed,” said Kiernan Shipka, who honed her red carpet skills during seven seasons of “Mad Men.”

The Miu Miu-clad starlet should have shared her tips with Zac Posen, who was literally sweating bullets over his red carpet gowns.

“It’s such an exciting night, lots of good dressing and I’m really proud — Susan Sarandon, Viola Davis and my date, Halston Sage,” said Posen of his red carpet scores. “So now I can finally wipe that drip of sweat off my forehead.”

For once, the red carpet was tented and air-conditioned, so most celebs, including “Insecure” star Issa Rae, in custom Vera Wang, and Tessa Thompson of “Westworld,” remained pristine until the photo op.

As she twirled around in her metallic Rosie Assoulin gown, Thompson said, “Honestly this felt like a dress I had never seen before. And it’s really hard to find that on a red carpet because you end up going through the carpets of past years and you have this idea of what you ought to look like, but I just have to remind myself that what I’m always attracted to are people who seem to break rules. These are the Emmys, it’s the time to dress up and feel the way you want to feel.”

Of her costar Evan Rachel Wood, Thompson said, “We went to The Night Before party last night and we both arrived at the same exact time in black tailored suits. We were like two bosses walking around the party. People say you’d be mortified if you arrived in the same dress but somehow arriving in the same suit isn’t a problem — men do it all the time.”

Elsewhere, Kathryn Hahn was busy saying hello to John Turturro and Stanley Tucci. “My favorite part is seeing all the people I admire and worship on the small screen,” said Hahn. “But the worst part is the line for the bathroom, because I have the smallest bladder.”

“House of Cards” actor Joel Kinnaman was also doling out some truth on the carpet. “I was a little hungover last year, so this time the show is definitely better,” he said.