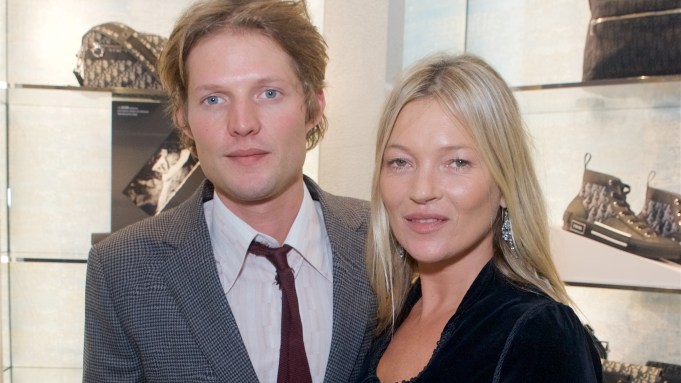 “It made sense to make a book to celebrate all these different people that were friends of the house, people we admire,” said Jones. “It’s a real diverse cross-section of people that do amazing things in different ways. There were people that we wanted in there from the very start, for sure, but then there was a fluidity also.”

Von Bismarck added that “Christian Dior himself was working with the leading creatives of his time such as Jean Cocteau and Salvador Dali, and so we sought out some of the most inspiring figures of our age. We also wanted to work with actors. Marlene Dietrich and Sophia Loren were dressed by Christian Dior and now Kim is dressing Eddie Redmayne and Ben Kingsley. There are also friends and collaborators of Kim’s and mine from many different fields who help to inspire his creative genius, friends of the house of Dior, as well as of the Teenage Cancer Trust.”

Jones wanted his version of the “Dior and I” treatment when he switched from Vuitton to Dior. “I wanted to do a book of the first part of Dior — a document, in a timeless way,” and he asked von Bismarck, whom he admired, to do it.

“I was just joining Dior, and Nikolai was one of the few people that I’d told. I love Nikolai’s work and it suited what I wanted to do — so I said let’s make a book together,” he said. “There were a lot of things I’ve seen in his work that I relate to completely. And then I saw some of the portrait work that he was doing, and I really thought that it is a way I’d love to portray Dior.”

The appreciation is mutual. “His use of the couturier has been a stroke of genius. The bead and stitch work on some of the Raymond Pettibon collaboration is unbelievably beautiful. His use of the Christian Dior archive and his deep sense and fascination for the history of the house is something I respect greatly, being fascinated by history myself, this is something that really appeals to me. Maybe that’s why we get on so well,” von Bismarck said.

Von Bismarck is the great-great-grandson of German Chancellor Otto von Bismarck and he worked for Annie Leibovitz for two years before striking out on his own.

British photojournalist Don McCullin played a big role in the realization of the Dior project, according to von Bismarck. “A couple of years ago we talked about a project I wanted to undertake in Nigeria. He suggested I stay in London for a year and embark on a portraiture project before I went to Nigeria,” he said.

“He said it would teach me ‘discipline and patience’ and, after that, I would be free to photograph where and what I wanted. It was at this point that I went for a long walk in Hyde Park with Kim Jones. Kim had just taken over at Dior and he suggested we collaborate on this project and make a book. That is how it all began,” he said.

“Don has been an inspirational figure to me, both before and since I’ve met him. When we first met we discussed all the places we had photographed in common. As this project began to take shape and I began to start shooting, we were talking once a month. He was passing on words of wisdom and I was all ears. He, in some form, mentored me and has been such a big part of this project, perhaps unwittingly, right from its inception so I had to ask him to be in the book. Luckily he accepted.”

Jones and von Bismarck agreed that the whole book should be shot on film and that most of it should be in black and white. “We were both particularly keen that the book should become a historical document with a sense of timelessness. I wanted the subjects to be portrayed as simply as possible. I kept the sets very closed and had a small team to maintain the feel of intimacy I wished to capture,” von Bismarck explained.

“I had thoroughly researched and planned each shot, and so knew exactly the feel I was trying to create for each sitter, and often had specific references to show them when they arrived so they knew where my mind was at. This allowed for a conversation to develop and I hope this collaborative spirit comes through in the portraits,” he added.

The young photographer enjoyed the contrast the project provided compared to his 2013 one of photographing tribes in Ethiopia. “Photographing the Omo Tribe in Ethiopia, for example, involved living in a tent for a month, washing in a river, drinking cow’s blood for breakfast and really living by local customs. The positioning and pose in my reportage work are completely natural, none of it is staged, none of the sitters are asked to stand in any specific way,” he said.

“In the portraiture book, by contrast, preparation and stylization have been central. The shots are a lot more structured, every layer is thought through from the backdrop to clothes, to pose and lighting. The big similarity has been that they have both been incredibly intense. But this is something I thrive on,” said von Bismarck. “Working 16 to 18 hour days on the ‘Dior Sessions’ for weeks on end was grueling — give me a tent and cow’s blood any day.”