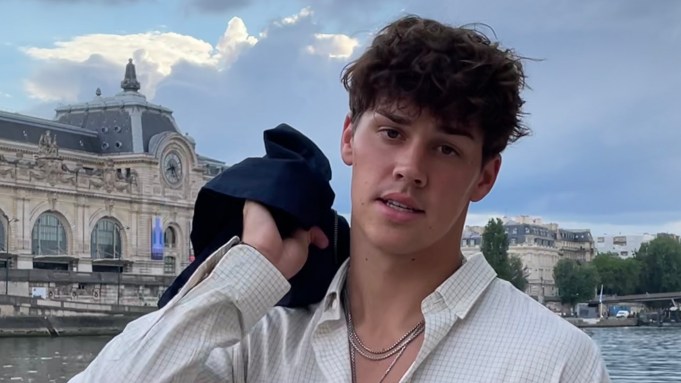 Alexandre Mattiussi wrote a love letter to the neighborhood of Montmartre, where he staged his latest Ami Paris fashion show on the steps of the Sacré Coeur cathedral with an expansive view of the city below. The designer played up the location by having Audrey Tautou, “Amelie” in the flesh, open the show.

It was a star-studded runway with Cara Delevingne, Karen Elson and Kristen McMenamy among the models to walk the runway, while Naomi Campbell and Carla Bruni sat front row.

“I’m all in,” he joked of dressing to go with the day’s love theme. How he became associated with the French Fédération de la Haute Couture et de la Mode is a mystery. “They just kinda rang me up. I guess just being here and coming to these events and meeting the right people and having fun. It was very organic, obviously,” he said of the video. He was also wearing Ami in the video, which he shot on his phone.

“I knew how to say ‘je t’aime’ but that’s as far as my vocabulary goes right now, but I’m here a lot so I think I will start brushing up on it,” he added.

Olympic gold medalist Tom Daley, who just collaborated on a capsule collection of knitwear for the brand, was in awe of the venue and the view. “I am so excited and seeing everyone turn up, I mean it’s people watching heaven. What a way to see Paris,” he said as he gazed over the city.

“This is next level,” added his husband, Oscar winner Dustin Lance Black. “I do enjoy [fashion shows] because it’s about making the fantasy into reality and don’t we all need a little more fantasy right now.”

Xavier Dolan introduced himself to Italian singer-songwriter Mahmood, whom he said he recognized from following on Instagram. The “Matthias and Maxime” director admitted that he is good with remembering faces, but is not so strong in the remembering names department.

His upcoming CanalPlus TV series has finished shooting and is in the editing room, a process that has become all-encompassing and “feels overwhelming” at times. But he took a night off to take in the Ami show, though he doesn’t look to models for casting. “It’s a wonderful way to connect with actors and actresses because they are invited, but I don’t have that consideration in mind. I think fashion is an art form that I really admire and it really inspires me in a different way,” he said.

Guests were taken to the afterparty by tourist train to a local high school, where Anderson .Paak was set to DJ. Walking out to screaming crowds, .Paak enthusiastically hammed it up and posed for pics. “I enjoy it, I kinda like it,” he said as he was mobbed by kids. Flashing his megawatt smile, he added: “I used to bag groceries, so there are worse things.”