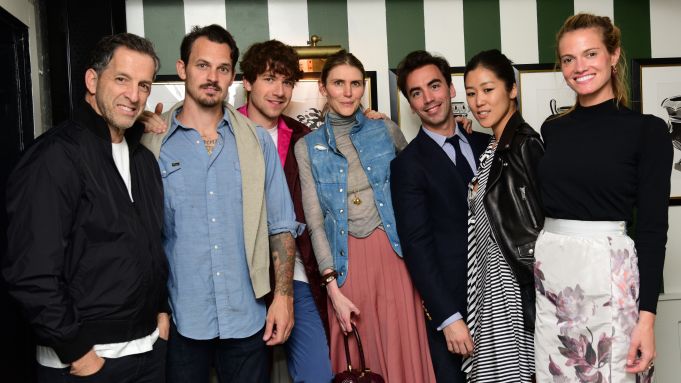 “Our development director’s mom went to Doutzen’s hotel, and sewed her into the dress.”

The Met Gala may be all but history by this point in the week, but for young designers on the heels of their first Met dressing credit – and a surprise one at that – the story is far from old.

On Thursday night, Laura Vassar of Brock Collection (which was worn by Doutzen Kroes on Monday to the gala) joined husband/design partner Kristopher Brock as well as Sander Lak of Sies Marjan, Gabriela Hearst, and Fernando Garcia and Laura Kim of Monse for a celebratory cocktail party at Omar’s La Ranita in recognition of their competition for the CFDA Swarovski Award for Emerging Talent.

“We got a call an hour before, and it was Doutzen’s agent,” Vassar continued of how Kroes came to wear their dress on Monday, “and he said, ‘Laura, Doutzen wants to wear your dress, the zipper is broken, and we have an hour until she’s out the door – what can we do?’ And we had no idea that she had the dress or was going to wear it. We were in L.A., which is where we are based – we didn’t watch it live but we were looking at the photos as they came in. It was a dream come true, truly. It was like magic.”

The pool of designers, which also includes Virgil Alboh of Off White (who couldn’t make it), will be up for the award at the 2017 CFDA awards on June 5.

“What’s exciting about this is that every experience, we meet new people,” Vassar said of her peers. “We meet new designers, we’re exposed to different people in this industry and we’re inspired every time. We hadn’t know anyone from this group. Today was the first time we met.”

“What I like about this group is that as people, we’re very, very different,” Lak said, later in the evening. “Our backgrounds are completely different – and also, the brands that we have, there’s no overlapping whatsoever. So it’s really quite nice. There’s no feeling of competitiveness. I don’t have it at all. I feel like everyone has a real strong identity and we’re kind of just next to each other in a nice way.”

And lest one think an awards competition would bring out some nastiness, Lak said it’s been anything but. “Because, also, what’s the point?” he said. “We are all having roughly the same kind of struggles and we all know what it’s like to be a new brand and how to get exposure – it’s nice to also be able to learn from each other and listen to each other and help each other. We’ve already exchanged, ‘oh, you should go here, this factory is really good.’ Because in the end we’re all in it with the same goal. It’s not about being secretive with things – I don’t believe in that. Sharing is caring.”