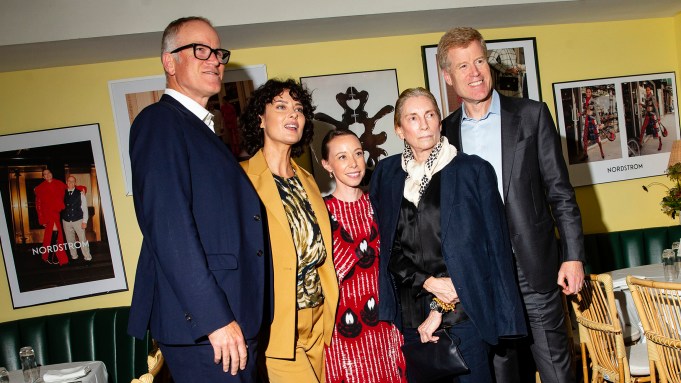 Is American Bar already the NYFW MVP? After hosting the Jeffries anniversary party on Tuesday night, the buzzy downtown restaurant welcomed the fashion crowd back for a second night to officially kick off fashion week.

“You can tell from the pictures that we had a little bit of fun,” said Harlow before dinner, glancing at the campaign images hanging around the dining room. “The fun that we all had together on that day sort of inspired tonight. Sometimes on a shoot it’s the right combination of people, the right energy — and so here we are.”

“It’s really a celebration of what New York is,” said chief executive officer Erik Nordstrom of the initiative, calling out the spirit of reopening and reengagement felt around the city this season. “And [Nordstrom] is still pretty new to New York, too, so to bring a newness and an excitement to celebrate New York designers and so much of what New York is about — I wish I came up with it.”

“I feel like we really upped our game here when we hired Rickie,” Pete Nordstrom told the crowd as they sat for a family-style dinner spread of popular American Bar dishes. “Everywhere I go with her, even when I’m not with her, people want to comment about how fortunate we are to have her on our team, and I completely agree.”

“We have so much that we’re celebrating tonight, first and foremost the campaign,” said De Sole, who joined Nordstrom earlier this year in the newly created role of women’s designer fashion & editorial director. “Obviously it’s a family business, and I feel like I’ve become part of your family in the six months that I’ve been here. And everyone here tonight, you are a part of that, too, and we’re so grateful.”