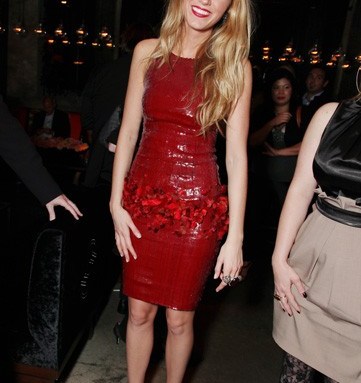 Contrary to popular belief, New York Fashion Week hasn’t been infiltrated by all of Hollywood. Dozens of big-name actors circulated around Toronto over the weekend during the city’s annual film festival. And most of them turned out for the premiere of Ben Affleck’s much-awaited film “The Town.” Stars Blake Lively, Jeremy Renner, Jon Hamm, Chris Cooper and Affleck were joined by Ed Norton, Channing Tatum and “Breaking Bad” Emmy winner Aaron Paul. Perhaps in an effort to keep the spotlight on her husband, Jennifer Garner snuck in just as the lights went down.

Even more stars came to the after party, hosted by InStyle, at Asian restaurant Ame. Josh Brolin and Greg Kinnear held court at the bar, Justin Long caught up with Lively (whose beau Penn Badgley was at another screening across town) and a bearded Noah Wyle mingled among abundant trays of sushi.

Earlier in the day, all the action centered around the Windsor Arms Hotel, where actors were visiting the InStyle photo booth. There was Freida Pinto, Emma Roberts, Matt Damon, Clint Eastwood, James Franco, Kate Mara, Carey Mulligan and Anthony Hopkins, who had everyone in stitches over his impression of Woody Allen.