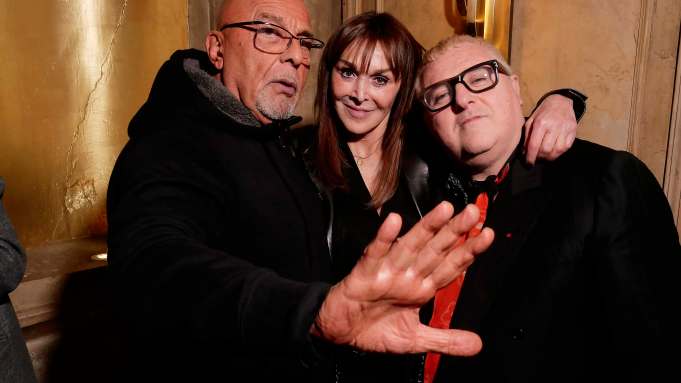 PARIS — Times are hard for media nowadays, but you couldn’t tell from the joyful party thrown by French fashion magazine Numéro on Thursday night.

The glossy publication, created by Babeth Djian in 1999 and owned by Paul-Emmanuel Reiffers, took over trendy new Japanese restaurant RAN in the 8th arrondissement to celebrate its 200th issue.

The evening was a cool mix of fashion designers, including Bouchra Jarrar, Olivier Rousteing, Julie de Libran and Alber Elbaz, and promising young French talents. Félix Maritaud, who is nominated for the award of most promising actor at the Césars, the French equivalent of the Oscars, was excitedly telling friends about the upcoming release of the film “Sauvage,” in which he plays a male prostitute, in American theaters next April, while actress Christa Theret and new Belgian music sensation Claire Laffut stood in line to take pictures at the party’s photo booth.

To the sound of rhythm and blues tunes played by DJ Kiddy Smile, Djian was greeted with an avalanche of hugs from friends and collaborators.

“We’ve known each other for years,” said photographer Jean-Baptiste Mondino, who shot models Alexandra Micu and Lexi Boling for the cover of Numéro’s 200th issue. “Since the French liberation,” he joked.

The secret of the magazine’s success? “Love, always and forever,” gushed Djian, hanging on the photographer’s arm.

“I created Numéro because I didn’t find what I needed in other magazines,” explained the cofounder of Numéro. “I wanted to be able to read something about fashion, but also books and art, not articles about wrinkles, losing weight or keeping a man.”

The evening prompted guests to reflect on timelessness and various success stories. “For me, the person whose evolution touches me the most is Rihanna,” Rousteing said. “She has never forgotten where she is from, she defends her origins, she defied all the codes, playing between masculine and feminine, pop and hip hop. Above all she is humble and loyal.”

For de Libran, fashion teems with impressive career trajectories. “I’ve been following a lot of talent in the last 20 years,” said the designer, who before arriving at Sonia Rykiel in 2014 acted as studio director at Louis Vuitton. “But for me there is one designer whose story stands out: Azzedine Alaïa. I’ve admired his work forever.”

Minutes before Dita Von Teese stopped by to catch up with Betony Vernon at the bar, Elbaz showed up full of beans, still basking in the newness of his recent bleached hairstyle. “Isn’t it fabulous?” he smiled. “I definitely feel like I’m enjoying life more since.”

The designer warned against treating prestigious fashion careers like Cinderella stories. “We need to always remember that Cinderella had a stepmother who gave her s–t,” he said. “Success is about authenticity, being yourself whoever you are. Those are always the greatest success stories.”