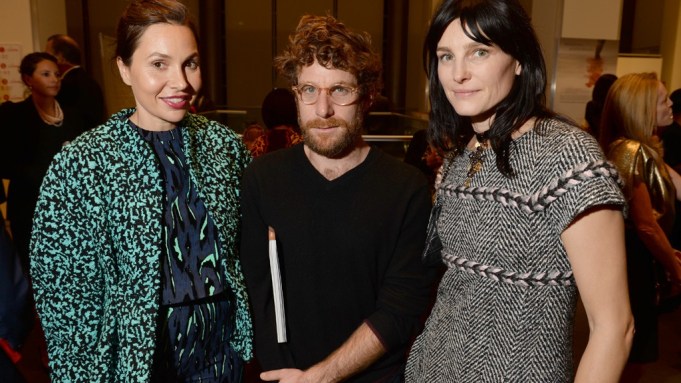 The evening was already in full swing when Jen Brill and Mel Ottenberg turned up on Thursday night. The pair, regular dates to such gatherings, breezed in just after eight and were the last to up the cool-kid quotient at the “Take Home a Nude” party, a staple of the New York social calendar that is perennially packed with art-world arbiters and those hoping to join their ranks. The room was buzzing with pretty gallerists, collectors and socials there to get their photograph taken. And the cool-kid faction? Dao-Yi Chow, Misha Nonoo, Kyle Hotchkiss Carone and Mary-Kate Olsen.

Guests shuffled around the periphery of the room eyeing the T&A on display. Works from Jean Pigozzi, Cass Bird, Ross Bleckner, Ryan McGinness and Craig McDean were all up for grabs during the silent auction. Casey Fremont Crowe was monitoring a sculpture series of pastel-hued bare feet. “I’m watching it carefully,” she said. “There’s some time before the auction closes. That’s when you have to bid, right at the end, so there’s not too much action on it.”

“I’ve never bid in an auction before, but I get supercompetitive with this type of thing,” Lindsay Ellington said. Fortunately, she was Nonoo’s date for the night, and the designer is schooled in the subject (her hubby, Alexander Gilkes, launched Paddle8 three years ago). “You just have to stand in front of the little paper [where bids are placed] once you’ve found the piece you want,” Nonoo said. “Find a little red dot to put on it and tell people it’s sold.”

Speaking of little red dots, while the live auction was starting, Scout Willis reflected on her recent topless jaunt for the “Free the Nipple” campaign. “I see quite a few nipples. I’m in good company,” she said, scanning the room. “No, but, really, I don’t know, to be honest, ever since the Free the Nipple thing, I’ve really been trying to go underground and create my own content to put myself out there,” Willis, glassy-eyed and stinking of a certain fetid odor, said. “I feel like the message was put out there and became bigger than me. I didn’t want to be, like, the image for it. I didn’t want to be nipple girl.”