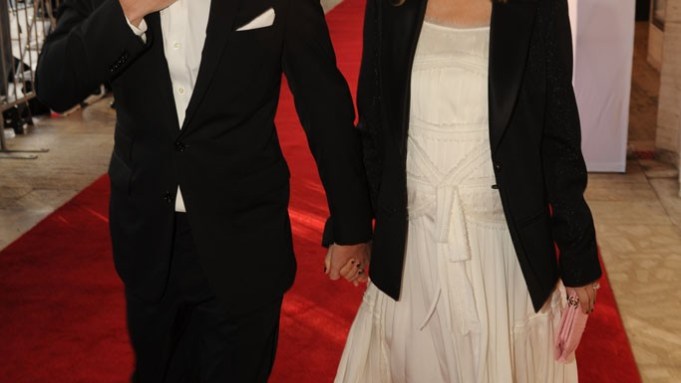 The New York City Ballet Spring Gala on Thursday night was a “one-time-only salute to France” titled A La Française, though it took place at the David Koch theater at Lincoln Center and everyone was far more interested in what was happening onstage than the recent French elections.

“It was incredible,” Carolyn Murphy said of the two-hour program, which featured three ballets and two world premieres: “Mes Oiseaux,” with choreography by Peter Martins and costumes created by J.Mendel, and “Two Hearts,” choreographed by Benjamin Millepied and costumed by Rodarte.

“Peter [Martins] told me that he wanted something very emotional [for ‘Mes Oiseaux’],” Gilles Mendel said of his three costume designs, which employed illusion netting and dark swirling slashes across the torsos, and ended in abbreviated flared black skirts with either red, fuchsia, or green underlay. “It’s hard to do something emotional with only three [dancers] — I wanted to make them seductive, though they are quite young looking, I wanted to give them a graphic moment, an elegant moment, to show off the beauty of their bodies and their dancing.”

The evening also marked the return, after a four year absence, of the much beloved “Symphony in C,” with original George Balanchine choreography and slightly amped-up costumes. Sticking to the original Balanchine color palette of white tutus and black tunics, company costume designer Marc Happel was inspired by a Christian Dior gown from 1949 called “Junon,” which featured gradated beading of varying opacity. Swarovski had donated crystals to embellish the costumes: when the curtains rose on “Symphony in C,” the audience burst into applause at the sparkle alone.

Millepied drew inspiration from the Northern European folk song “Lord Thomas and Fair Eleanor,” with vocalist Dawn Landes performing the ballad from the orchestra pit. Laura and Kate Mulleavy’s designs were black and white and rather athletic, off the shoulder and featuring cut out panels at the waist for some of the female dancers, with sheer black-striped skirts exposing white leotard bottoms that looked almost like tennis underpants. The men wore sleeveless white shirts and looser-fitting white pants with thick black stripes.

“There was definitely a sporty influence,” Kate Mulleavy nodded. The sisters designed the ballet costumes for 2010 film “Black Swan,” where their choreographer had met his wife, the evening’s honorary gala chair Natalie Portman, who was present but rather press shy.

“I’m not — ” she said of discussing her husband’s ballet, before heading for her dining companions amidst the French Garden inspired interior of the promenade. Portman is the current face of Miss Dior Chérie perfume, the house was a cosponsor of the gala along with Swarovski. Deeda Blair, David and Julia Koch, Waris Ahluwalia and Fe Fendi were also among partygoers.

“It was insanely gorgeous,” said Jill Kargman, whose tablemates included her brother Will Kopelman and his fiancée Drew Barrymore.

“Oh, they’re the cutest,” Kargman sighed of the couple. “They’re just so happy. It makes us all happy.” Kargman was squired by her husband Harry, whose sister Bess Kargman had just premiered her directorial debut “First Position,” a documentary about young dancers preparing for the Youth America Grand Prix. Was he sick of ballet? “Not yet,” Kargman smiled.