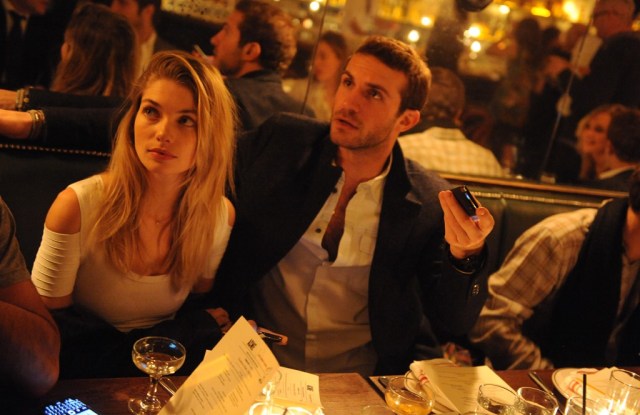 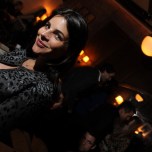 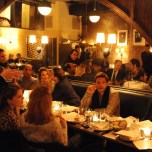 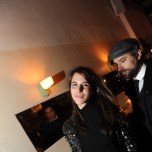 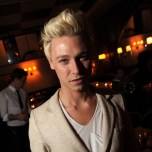 Vladimir Restoin Roitfeld’s pre-fashion week gallery shows and subsequent after parties have become a favorite fete over the past few seasons, a benchmark-cum-harbinger of the days and nights to follow. Where fashion week parties happen, people will go, and on Tuesday night roughly a thousand people headed to 570 Washington St. for the opening of Restoin Roitfeld’s exhibition with Ouattara Watts (aptly entitled “Vertigo,” considering the amount of time most revelers spent in flux, spurred on by the sharp points of model-esque elbows). “I believe in his art,” Restoin Roitfeld said of Watts, a protégé of Jean-Michel Basquiat and a previous participant in both the Whitney and Venice Biennale. “It’s inspiring, truly. And the appeal of the history [behind it] is undeniable.”

Watts’s 20-odd works feel less tied to a place in time than to movement itself: the wall-size canvases are saturated with bright pigments and swirl with geometric shapes and numbers. Basquiat’s influence is undeniable. Diane von Furstenberg and Salman Rushdie attended the opening, both embracing the artist. “Aren’t they wonderful?” von Furstenberg asked, indicating a nearby canvas and adding, “So vibrant!” as she and Rushdie were enveloped by the crowd. “It’s about this idea of vertigo,” Watts explained at the dinner held in his honor at Acme later that evening. “Life is about the people you meet, the encounters and the feelings that you have, the shock of it all.” His entry into the restaurant was greeted with a hooting standing ovation from the party.

Despite the fashion industry’s essential fascination with “the new,” there was a certain nostalgia on Tuesday night for the previous version of this party. “It always turned into a dancing party at Indochine,” Carine Roitfeld agreed. And tonight? “Wait and see, the downstairs is open,” the Roitfeld matriarch smiled.

Diners were hustled along the long, curved marble bar and squeezed around tables and into booths to share Danish comfort food, family style. A table running down the middle of the space held some traditional art-world members from Watts’ early years in New York, while the booths lining the walls held more typical fashion week fare: Stavros Niarchos and Jessica Hart, PC Valmorbida, Sante D’Orazio, Caroline Sieber, Virginie and Claire Courtin-Clarins. The downstairs was opened for late-night mischief and some trickled down to dance, but for most, the evening ended a little after midnight, with partygoers professing intended conservation of energy for the days ahead.